‘This is a revolution waiting to happen’

Ajay Mathur is doing his bit, and then some, to help with the global effort in achieving the daunting objective of net-zero emissions by 2050. The recently appointed director general of the International Solar Alliance (ISA) has a part to play as the world steps on the pedal to speed up the development and use of renewable energy, the holy grail in getting to the goal of a cleaner, more sustainable planet.

Previously the director general of the New Delhi-based Energy and Resources Institute, Mr Mathur has been a member of the Prime Minister’s Council on Climate Change and was the Indian delegation’s spokesperson at the 2015 Paris climate summit. He talks here to Christabelle Noronha about the challenges India and the world face in doing the right thing to cope with an emergency like no other.

Edited excerpts from the interview: 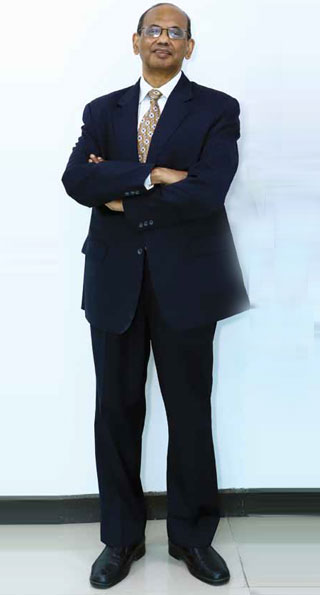 India’s ability to reduce poverty without depending too much on fossil fuels will to a large extent determine the success of global efforts in combating climate change. How can that be made possible given our economic realities?

The key issue is that a large amount of our energy-based needs are yet to be met. Whether it be for agriculture, lighting in homes or even for dental treatment, energy is essential. For all such needs, green applications provide power at a cheaper price than do fossil fuels. So, as far as the economics is concerned, the situation is good and getting better.

The key challenge in using green energy is the availability of such options: I should, as a user, have access to it, maintenance should be available and I should be able to pay for it in a manner that’s comfortable for me. But capital costs for solar electricity are much more than for fossil fuel electricity; that’s where the problem lies.

Does India have the financial muscle to make these investments?

If we go back 40 years to when the green revolution happened, we were very dependent on pumped water; it was the only solution. The problem then was the same: where will the capital costs for these pumps come from? Is that a problem now? No, it is not, and why? Because banks started lending money. Similarly, as banks get used to lending for solar applications, we will see an increasing number of solar-based devices come into play.

Agricultural pumping powered by solar is easily available today and the prices at which you get them here in India are among the cheapest in the world. However, it is tougher to get a loan for a solar pump than it is for diesel-powered equipment. That’s where access to finance comes in. Banks have to get used to the reality that risk assessments for solar pumps will be different.

For all the immediacy of the climate change emergency in India, this is not a crisis that resonates with the public at large (it was a non-issue during the recent elections in multiple states). How much of a drawback is that in finding equitable solutions?

Yes, climate change is a non-issue as far as politics in India is concerned, but urban pollution is an issue, the availability of electricity is an issue, water for farming is an issue. The challenge lies in providing answers that are free of fossil fuels and are renewables-based.

But how can these solutions be made affordable?

If a farmer invests in a solar pump, it can become an electricity-generating device. The farmer can use it for the time he needs the water. When he does not need the water, the solar panels produce electricity that can be sold back to the grid and this becomes a source of income.

I think that innovative ideas such as this, which form the heart of the central government’s PM-KUSUM scheme — which aims to provide clean energy to more than 3.5 million farmers — can help increase the demand for renewables-based products in the market. Yes, the equation will be different for different classes; the solar lighting implementation model will be very different from that for an electric two-wheeler.

The silver lining amid the climate change gloom is the steep fall in the price of renewables, particularly for solar power. What are the positives here for our country and the world?

The great advantage is that the vast amount of renewable-energy infrastructure for supply and use is yet to be built. It is estimated that roughly half to two-thirds of energy-using and energy-generating structures remain to be built. The drop in prices means that, just one year from now, we will possibly be in a situation where almost every solar application will be a cheaper option than its fossil-fuel counterpart.

That means people like you and I can actually invest in solar. We can invest in renewables and get the same kind of benefits we would if we were using fossil-fuel systems. And we will be economically and environmentally better off. I come back to the point that the key challenge is access to finance. This is a revolution waiting to happen.

You have been quoted as saying India’s energy emissions are likely to plateau and then fall earlier than you previously expected, from around 2035 to 2025. What’s the basis of your optimism?

5 per kWh, which is the current price for power from a new coal-based station. In 2017 we had expected that we would cross this figure of less than

With batteries, we are able to get electricity at

5 with a bit of luck. This means that going ahead there will be no case for a financial institution to fund a coal-based power station; solar-powered and battery-generated electricity will be cheaper. 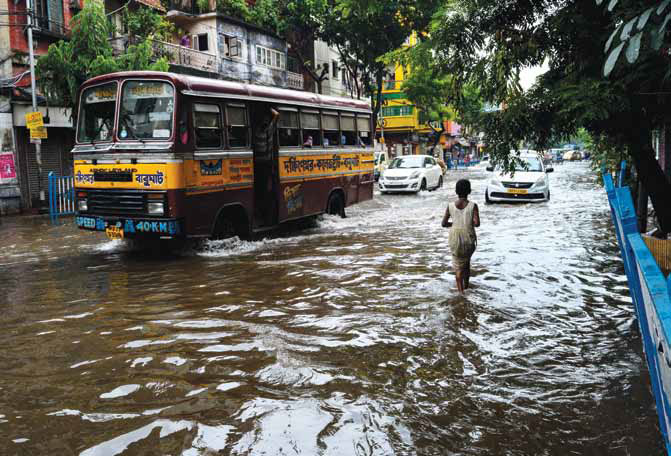 An inundated Kolkata street after a heavy downpour; climate change has led to an increase in extreme climatic conditions

There will certainly be an increase in coal-based electricity generation in the near future, till solar and battery installation reach scale, but once it is established that solar power and batteries can provide round-the-clock electricity at the same price or cheaper than coal, that’s when investments in coal-based plants will taper off and we will see a plateauing occurring.

Beyond fossil fuels and emissions, what should India’s priorities be in mitigating the climate change risk? Are we on the right track in tackling deforestation, extreme weather events, coastal salinity and the like?

There are right steps being taken in the face of the extreme climate change events affecting us. Cyclones in coastal areas, floods or droughts in inland regions, a dramatic rise in instances of urban flooding — these are consistent with the climate change crisis upon us.

To better address this crisis, it is important to put adequate tools in the hands of local administrations to enable them to control such situations before they start happening. That means early-warning systems, delivering water supplies in drought-prone places, designing urban infrastructure to enable, rather than stop, floodwater flow, etc.

You were the Indian delegation’s spokesperson at the 2015 Paris climate summit and you have just been elected as director general of ISA. What is the experience like of dealing with climate change and related subjects on the international stage, given the politics and the nationalism, the pulls and pressures, the negotiating and the bargaining?

This is a difficult question. On the global stage we see three different kinds of pulls. One is from those who want to make a change, an example being the European Union. Then you have the United States, where the Democratic party pushes for climate change action and the Republicans go the other way.

The second strand concerns West Asian countries. Whatever action the rest of the world takes is going to hurt the economies of these countries, given that they depend so heavily on oil exports to fuel their development plans. Then there is the third part, which applies to countries like India that are in desperate need for a lot more development. Non-availability of finance and technology shortfalls limit the action these countries can take.

Climate negotiations are essentially about bringing these three parties together. At the Paris summit, we were able to find a via media through which every country expressed what it could do on its own steam to mitigate climate change, and what it could do with international support. Rather than top-down goals, we were able to get people to commit, the big positive being that each participating country could promise something.

The process of trust and confidence and the process of upgrading your promises become a virtuous — instead of a vicious — cycle. You are not, then, fighting one another and running the risk of being in a worse space than before.

What’s your best-case scenario of what can be achieved on the climate change front by 2035, globally and from the India perspective? And what’s the doomsday picture?

As far as India is concerned, by 2035 the electricity sector would have reached a point of steady decline in CO2 emissions. Secondly, in the transport sector we should have moved towards 100% electric or hydrogen mobility sometime around 2035.

Agricultural pumping powered by solar is easily available today and the prices at which you get them here in India are among the cheapest in the world.”

In the industrial sector, which is the toughest one, I expect that by 2035 commercially mature, non-carbon technologies will be available. We don’t see much of that currently, particularly in the steel and cement sectors, where the largest amount of energy is used. That sums it up for the best-case scenario.

In the worst-case scenario, there could be a huge backlash from the coal sector and solar and battery systems could be unable to demonstrate economic and technical viability in providing round-the-clock electricity.

The thing that I fear most is that we become unable to transition on the transport side. On the industry side, my feeling is that this is going to be dependent largely on the amount of research and money that goes into new carbon-free technologies, in India and globally.

My doomsday scenario is this: if by 2035 we are not able to find solutions for the industrial sector, we would be saddled with CO2 emissions that are at a similar level to today’s, though on the decline.

Climate activism comes in many shapes and sizes, some of it pushing the boundaries of legal protest. Where do you draw the line?

That depends on the kind of organisation you are in, but we all have to accept that carbon-free technologies and applications are our preferred options. There will be places that hold out and there will be a need for activist movements — whether led by institutions or individuals — to rally against and counter these holdouts.

The guys who are not moving symbolise the status quo; there is so much vested interest in continuing with what they have been doing. I believe in showing and informing people that zero-carbon options are available and viable, making the case that growing volumes will make these options cost effective, and they will create jobs for our children.

How can people at an individual level contribute best to save our planet?