‘Every country has to find its own unique solutions’

Being a social scientist in these discordant times is not, contrary to what some may believe, cause for despair. It is certainly not for Ravi Srivastava, currently director of the Centre for Employment Studies at the Institute for Human Development in Delhi. One big reason, perhaps, is the canvas he gets to work on — India, with its overload of social issues and societal dynamics.

Labour and employment, agriculture and rural development, migration, the informal sector, and land reforms — Prof Srivastava has covered a lot of ground over the course of a career that has seen him serve at the Jawaharlal Nehru University, Delhi, and at the Institute of Development Studies, Jaipur, while also being involved with several national and global organisations.

A prolific writer and researcher, Prof Srivastava speaks here with Philip Chacko about the state of social development in pandemic-hit India, migration and its changing patterns, and the path of social and economic development that may work best for the country. Edited excerpts from the interview:

How much of a hit has social development as a whole taken in India due to Covid-19? How far back has this pushed the country on critical human development indices?

The pandemic’s impact on social development in India can be compared, in a way, to the impact of AIDS at its peak on the African subcontinent, and maybe it’s even worse. If you look at incomes as a proxy for employment and living standards, they have probably declined for close to 90% of households in one way or another, and the decline is very, very sharp for the bottom 70%. That means up to 350 million people could have been pushed below the poverty line.

There has been a huge impact, as well, on the health front for different sections of society, particularly in the second wave. In education, there has been a limited shift to online but what stands exposed is the digital divide that has resulted in so many children being left out.

Inequality has increased during this period; income inequalities have increased and so have regional inequalities. States with superior social infrastructure and policies have been better able to withstand the fallout of Covid-19. Kerala, with its social infrastructure and community structures, stands out in this regard. Tamil Nadu has not been too far behind and Odisha, among the poorer states, has shown more resilience.

The pandemic has exposed our health setup and our education system is in about as much a mess, and these are the two building blocks of social development. What should India’s priorities be in coping with the challenges here?

What has happened is that in a number of spheres we have followed mainstream development models and the trajectories of developed countries. We have not looked closely enough at the pattern of historical transition in these developed countries. We moved rapidly towards privatisation in health and education without correcting the weaknesses in our public health and education systems.

Despite having excellent policy frameworks for education and health, we pursued policies that were detrimental to both, and these stem from the 1980s. We started moving in the opposite direction without correcting the distortions in our public systems and this has created a great imbalance.

There are those who say that just pumping in more resources is not going to be a big help, but surely that is where you must begin if your spending on health is barely over 1% of GDP?

Essentially, in order to get to a universal health system, you have to start at the bottom. This is not a question of funding but about how the system is set up, how doctors are oriented to provide quality care and how the whole governance apparatus operates. 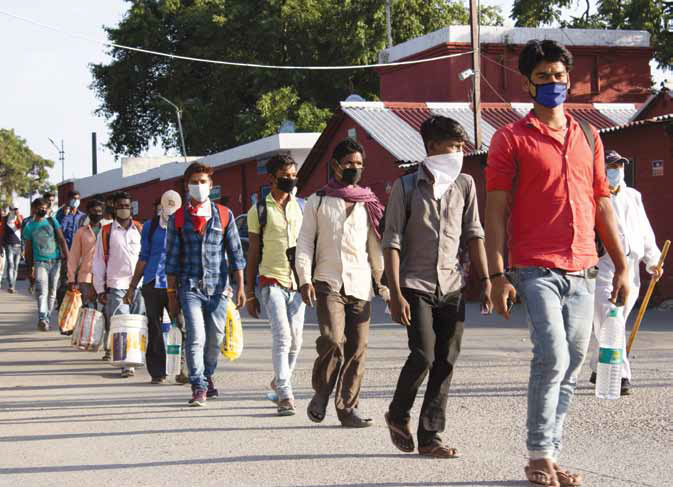 In Dehradun in Uttarakhand, migrant labourers returning home during the first wave of the Covid-19 pandemic

How different is the rural-to-urban migration phenomenon in India from the pattern seen in now-developed countries?

Mainstream development economists like myself see the rural-to-urban migration as a good thing. That’s because, in general, economies of scale are rare in rural and agricultural areas, and average productivity is lower. The reality of people moving to higher productivity areas, where higher wages are offered, has to be welcomed. It reduces disguised unemployment and it lowers the pressure on agriculture to provide employment.

Industrialisation in every country has been fuelled by rural-to-urban migration, the industrial revolution in Britain being an example. Those migrants lived in deplorable conditions for centuries before their condition gradually improved. Now, the difference between that pattern of migration and what we are seeing in India is that ours is not one-way migration. It is not temporary or permanent migration but circular migration, to a large extent.

The nature of livelihoods in industrial and urban areas is such that informal work dominates. People have seasonal access to employment and employers generally provide only subsistence wages. In the circumstances, survival means having a foothold in urban areas and going back home to rural areas, where at least part of the family is. That explains why labour circulation has become an important feature.

How does this kind of migration affect migrants and their families?

Firstly, without migration in some form or the other, you cannot envisage urban or industrial growth — absolutely not. I think last year, for the first time, the urban middle classes and industrialists came to recognise this when migrant labour fled cities and industrialised areas in large numbers. It is then that we understood how critical these people were to the growth and sustenance of urban centres.

The reality of people moving to (areas) where higher wages are offered has to be welcomed. It reduces disguised unemployment and it lowers the pressure on agriculture to provide employment.”

Migration of this kind is taking place in a situation where rural and agricultural livelihoods are declining and people are, in a sense, forced to move to urban areas. The employment being created there is of poor quality. Data shows that migrant labourers in urban areas work for an average of 11 hours a day and, of course, most of them do not have any social security. Clearly, this sort of a workforce and this sort of migration not only has implications for migrants and their families but also for industrial growth and productivity.

What’s the optimal way to address the challenges facing the country’s informal sector, which provides the vast majority of jobs to Indians but struggles to get the attention it deserves?

The Indian informal sector comprises roughly about 85% of the workforce. Meanwhile, a large part of those who work in the organised sector are informally employed; they don’t have a permanent job and they don’t have social security. Overall, including agriculture, this sector makes up a little less than half of the country’s GDP.

Broadly speaking, the informal sector is the core of India’s economy, but since we insist on looking at economic growth top down, we rarely ever consider the bottom 50-70% of economic activity. What we need to do is recognise the role of the informal sector and give it adequate room and space to grow and to formalise over a period of time, not through penalties but through incentives that will make the transition possible.

Between agriculture, the services industry and manufacturing, between the informal and formal sectors, between skilled and unskilled, what should India be aiming for to generate employment for its people, now and in years to come?

The cream of India’s economy, which is the large organised sector, will never be in a position to absorb our growing labour force, the reason being that as this part of the economy grows it also gets more and more capital intensive. And now, with artificial intelligence, robotics and all technology coming into manufacturing, these changes are going to become sharper.

Employment will continue to be generated, for sure, either in labour-intensive sectors (which is the informal sector) and the part of the production sector that is at the bottom of the pyramid (small and medium enterprises). The informal sector and small and medium enterprises have the potential to generate adequate employment in order to absorb the additional workforce. But the sad truth is that our policies have not paid adequate attention to one or the other.

Historically, our policies were designed to reserve a part of the economy for the small-scale sector and the informal sector. However, such reservation by itself was never going to be enough. We did very little to incentivise the growth of these sectors, which is why they remained stultified. This state of affairs got worse from the 1990s onwards with liberalisation, when we shifted more rapidly towards the precepts of a mainstream economy and we said, “The bigger the better.”

We de-reserved the space for small-scale industries and we also eliminated the minimal services that were available to promote the informal sector. Consider, for instance a labour-intensive sector such as garments and apparel. About 80% of employment here is in the informal sector, a large component at the household level. What we needed to do was upgrade the entire value chain of the business but we concentrated on the very top. Consequently, China’s share of the global garments trade, once roughly the same as India’s, is 10 times as much today. Even smaller economies like Bangladesh and Vietnam have overtaken us.

What about your hopes of India being able to employ all these people coming into the workforce?

There has been a remarkable setback to employment in India. Underlying this is the capital-intensive nature of our exports and manufacturing services. Our policy framework has demolished jobs in the informal sector and the small-scale sector, and the pandemic has dealt a near deathblow to the two. The outcome here has been a significant loss in employment and in manpower and labour resources. There has also been a tremendous loss in terms of the declining participation of women in the labour force. Getting back to even reasonable growth in employment is going to take a long time.

We should look at our human resources and fashion strategies of growth that are built around them. Every country has to find its own unique solutions, and these have to be context- and resource-specific.

Why does the development question so divide people, from political ideologues and academics to economists and social scientists? How do you find a balance?

When we moved towards liberalising the Indian economy, it was vital and necessary because we had stayed too long in protectionist mode. But in embracing liberalisation we also embraced the basic precepts of the Washington Consensus and, therefore, those of mainstream economics. We started emulating, in relatively quick time, the pattern of economic organisation that came to exist in the United States after many centuries of transition.

We can’t be like 17th-century England or 18th-century America, for sure, but we also cannot conflate various eras of structural change, as we are seeing with the Indian economy. In this country we are actually living through a stage where the patterns of the first industrial revolution are overlapping with those of the fourth. We have people with no means and no technology living at subsistence level and we have, alongside, industries that bank on robotics and artificial intelligence.

What we need to recognise is that we cannot impose the mainstream model of growth on the Indian economy because our reality is very different, our resource base and skill base are very different, and we are dealing with a world that is very different. We have to evolve our own pattern of growth, our own model of development. There has to be divisions and there will be divisions, but it could be a healthy division.

Do you sometimes despair of being a social scientist in India?

Our job is to understand realities and to advice or offer the best possible analysis that we can at any given time. As a social scientist, you cannot control social or political dynamics.