As Vanita Metkar can attest, life in the tribal belts of Maharashtra’s Amravati and Yavatmal districts is fraught with hardship. The 38-year-old tribal from Kharad village in Yavatmal used to eke out a meagre living from seasonal farm labour — mainly harvesting cotton and picking tendu leaves — that barely covered expenses.

“There was not enough work in our village and we had to travel to a different village every day. Even then, what we earned was never enough,” says Ms Metkar. Not anymore.

A year ago, Ms Metkar joined a Tata Trusts-supported smallholder poultry programme. It has been a life changer for her, enabling her family to earn close to

6,000 per batch of chickens (she has sold three batches already). “We have some savings finally,” says Ms Metkar.

The smallholder poultry programme was launched by the Trusts in partnership with the Maharashtra government in 2018. The goal was clear: to help tribal women in Amravati and Yavatmal secure an income through activities that are not seasonal or agriculture-based.

Poultry was a good fit since the women can manage rearing chickens along with their other activities. Three years down the line, the project has brought 880 women in 56 villages on board as poultry entrepreneurs.

Tribal women are among the most marginalised subsets of the poor in India and this explains the intent behind the Trusts setting up supportive business ecosystems for them. The smallholder poultry programme began as a pilot with 80 beneficiaries in eight villages of Dharni in Amravati district. Since then it has been extended to 800 beneficiaries in six village clusters: Achlapur and Dharni in Amravati district and Ghatanji, Ner, Darwha and Yavatmal in Yavatmal district.

The Trusts’ role straddles the entire project lifecycle, from setting up the implementation team to surveying the villages for socio-techno feasibility, selecting villages and beneficiaries and establishing market linkages for producers to sell their birds.

It starts with a screening process to choose women participants who would gain most from the programme. Beneficiaries, typically in the 18-50 age bracket, must have access to road connectivity, electricity and water, and the space to build a poultry shed near their home. The women have to be residents of the project area.

Once the beneficiaries have been selected, the project team uses state government grants to set up poultry sheds and procure the necessary equipment. More than 700 such poultry sheds have been constructed till date. The women receive training in poultry management, production and bookkeeping. 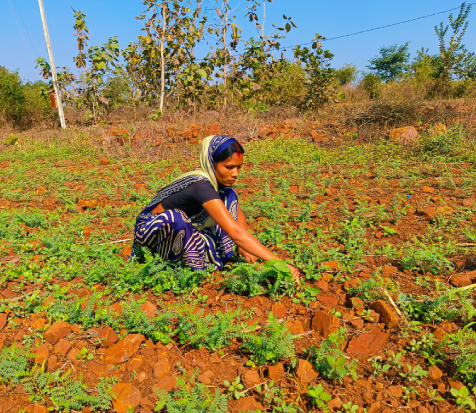 Maya Kasdekar at her agricultural field in Dharni in Amravati district

Maya Kasdekar has gone through severe financial difficulties in recent years but these are now in the past. “Whenever someone in the family fell sick, we had to borrow money for treatment,” says the now better-off poultry farmer from Dharni in Amravati district.

Ms Kasdekar uses her experience with the Tata Trusts’ smallholder poultry programme to help 200 other women in and around her village earn a living. She has been a part of the initiative for three years now and has reared eight batches of birds so far (she gets about

Being on the board of the Sipna Agrricity Producers Company in Dharni — one of the two farmer-producer organisations (FPOs) set up by the Trusts for the programme — has been an eye-opener for Ms Kasdekar. It has helped that she was trained for the responsibility, as also in poultry production, shed maintenance, bookkeeping and conducting weekly meetings with FPO members.

Ms Kasdekar’s experience and training have magnified her confidence. She now plays a key role in mobilising women in and around her village. “I want to grow this operation and bring more women into it,” she says.

The team organises exposure visits for new recruits to nearby farms to learn from other producers and hear their success stories. There is an animal health component built into the initiative. Poultry health is continuously monitored and records maintained. The data is analysed weekly and deviations are addressed quickly.

The team also coordinates visits from the state administration’s animal husbandry department to provide technical inputs and advice. In addition, some of the beneficiaries receive training as poultry doots (para-veterinary workers).

A crucial component of the programme is market linkages. Farmer producer organisations (FPOs) — community institutions that bring small producers together to improve their bargaining and marketing power — are a vital link in the poultry livelihood chain. The poultry producers have been organised into women-led FPOs, whose role is to ensure quality, competitiveness and on-time delivery of produce. 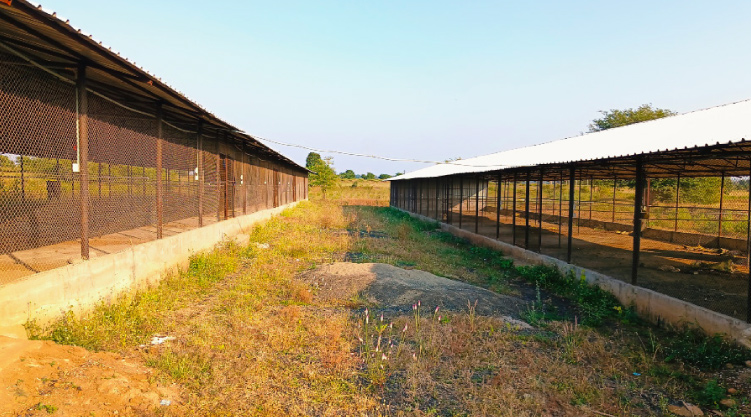 Two combined sheds, owned by 10 beneficiaries each from the programme, in Dahenda village in Amravati district

Two FPOs — Sipna Agrricity Producers Company in Dharni and Sahayta Women Poultry Producers Company in Yavatmal — have been incubated and some 600 women have joined these organisations. The FPOs have brought on board a private integrator, Amruta Hatcheries, to provide input material (chicks, medicine, feed and vaccines) and to purchase birds from the producers.

The Trusts have trained the management teams at the FPOs, teaching them how to mobilise more women, conduct weekly meetings and resolve internal issues. Currently, the FPOs' operations are overseen by professionals who report to a board of directors. Going forward, the hope is that the FPO members will gain the experience and knowledge to run these organisations on their own.

The smallholder poultry project has achieved considerable progress in the past three years. More than 100 batches of chicks are in process and some 1,100 batches are being reared in poultry sheds. There are 320 producers earning money and the project has generated a total yearly revenue in excess of

3 million. Once all 880 producers gear up to the expected four-five batches a year, this figure is expected to soar.

The amount earned by each producer is credited directly into her bank account. “These women have earned the money — and the right to spend it as they please,” says Asit Mohan, the poultry project programme manager with the Trusts. Financial independence has enabled the producers to earn respect from their families and others in the community, and they are vocal in convincing other women to participate in the project.

“The project has given me a sense of discipline. I now wake up early every day and look forward to my work,” says 48-year-old Pushpalata Watgure from Yavatmal’s Ghatanji cluster.

The poultry initiative was one of many that took a hit during the Covid pandemic. The lockdown slowed things down for the project as travel was impacted. Once restrictions were lifted, it took time to restart training. Shed construction, which had come to a halt, was resumed in September 2020.

Even during the worst months of the pandemic, the Tata Trusts team continued to stay in touch with the beneficiaries. “We would do video calls with them whenever possible and communicate with at least five of them daily to motivate them and keep their morale high,” says Mr Mohan.

Getting back on track is good news as the poultry project has the potential to bring welcome relief to many more tribal women in rural Maharashtra. The strain of moving from farm to farm as seasonal labour could well be a thing of the past for these women entrepreneurs.

“Once the project is fully operational, it will generate about

27.5 million annually in farmer wealth,” says Mr Mohan. “This will not only help rural women contribute to their household incomes, but also give them a voice in their families’ decision-making.”