The snack boxes come out quickly when the bell rings for the mid-morning break at a government school in Baramati in western Maharashtra’s sugarcane country. The kids dig into their food but one child is only pretending to eat. The boy has nothing in his box, and is embarrassed that his classmates will notice. But somebody does.

A volunteer with an uncommon rural education programme sees the child’s distress and gets about finding the reason. It’s a story he’s heard before: the kid is the son of migrant labourers, employed in the local sugar factory, whose dawn-to-dusk toil leaves them no time to put any food in the snack box. For the boy, and his parents as well, the midday meal provided by the school to all children is salvation. The volunteer understands that well enough.

He is part of the Digital Education Guarantee Card, or DEGC-ASHAA, project: an effort where the prime objective is ensuring that children from migrant families in Maharashtra’s sugar belt secure a better shot at formal learning.

ASHAA, which means hope, is an acronym for aamcha shikshan hakk: aamcha adhikaar and translates into ‘education is our right’ in the Marathi language. It also translates, on the ground, into getting these children into the school system and keeping them there. 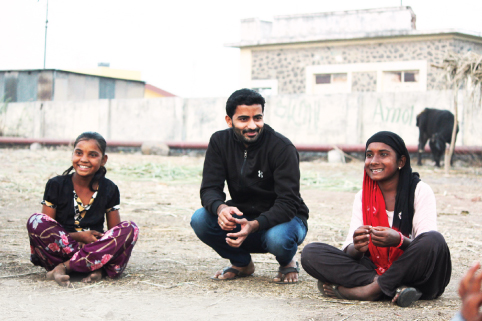 The DEGC programme, supported by the Tata Trusts, unfolded in Pune and Satara districts and it employed a combination of community mobilisation, digital surveys and academic progress tracking to identify and bring thousands of ‘missing’ children of sugarcane workers back to school. At the programme’s conclusion in 2021, after a running time of five years, close to 10,000 out-of-school children under 18 had been located and more than 3,600 in the 6-14 age group were enrolled in schools (or study sessions).

The need for a back-to-school intervention of this kind was acute. The nature of sugarcane labour migration in western Maharashtra is such that it forces poorer families to move from region to region in search of work. Their children are regularly uprooted in the process and rarely find a stable learning environment.

An estimated one million labourers migrate to western Maharashtra from other parts of the state ahead of the annual sugarcane-cutting season. About 150,000 kids from these migrant families miss school for six months when they leave their villages. The landmark Right to Education Act (RTE), which guarantees schooling for all children and has been in place since 2009, faces daunting implementation odds in such circumstances.

Before RTE came into force, many of the 200-odd sugar factories in Maharashtra ran informal saakhar shalas (sugar schools) for the children of migrant workers. There were one-off initiatives run by NGOs and regional political leaders as well. All of these were shut down after the Act was passed to ensure uniformity of education guidelines.

Empty stomachs at school are just one of the issues DEGC has dealt with. The programme team found that many migrant students remain hungry until 1.30 pm, the designated time when the government-sponsored midday meal is served. With help from the local education officer, the team got the meal timing moved up to 11:30 am in some schools.

DEGC has profited from partnerships with Maharashtra’s education department — which deputed a government teacher to the project — and Janseva Pratishthan, an NGO that worked on the implementation part. The foot soldiers in the initiative were 35 trained village mobilisers, who fanned out door-to-door across migrant hamlets in the project areas to connect with and collect data from migrant families.

Carrying smartphones and tablets, these mobilisers pinpointed migrant children and recorded their migration patterns, academic progress and previous school attendance details. The data was then fed into an app created for the purpose. “This is an integrated effort that is based on research about the education history of migrant sugarcane workers’ children and it’s the first of its kind in Maharashtra,” says Paresh Manohar, a programme manager with the Trusts.

The DEGC-ASHAA project’s use of technology has been a factor in its success, and an important reason why it has been supported to the hilt by the Maharashtra government.

In 2016, the state’s education commissioner directed all schools in Maharashtra to institutionalise the use of the DEGC-inspired education guarantee cards. Implementation was generally weak, but within the project area some 3,500 cards were issued by the DEGC team.

In 2018, the commissioner tasked DEGC with designing an app — similar to what was used in its own programme — to track every migrant child in the state. This app was to be aligned to the government’s database of students and the State Council of Educational Research & Training became a partner. A technology partner, Dhwani Rural Information Systems, was roped in to develop the app.

The new app was called Balrakshak (or child defender), in line with the state government campaign of the same name to bring out-of-school children back into the education system. Currently in its pilot stage, the app will allow teachers to update the activities and enrolment details of students on their smartphones and to see relevant data for their respective school, block, and district.

A key goal of the project was to ensure continuity of education. The programme team issued DEGC cards to teachers to document each migrant student’s subject competencies. The cards, which travelled with the students from village to village, made it possible to track their academic development (teachers would continue from where the student had left off). “The digital tracking and mapping of the students is our biggest achievement,” adds Mr Manohar.

The schooling component aside, DEGC has also had to address the concerns of migrant parents and their children. What the team discovered was not surprising. These kids find formal education an uphill task, not least because they are expected to labour in the fields alongside their parents when the sugarcane season begins. And, when they do come to school, they are often picked on by teachers and classmates.

“There are many good teachers and students but a few look down on us and also pick fights with us,” says Asmita Dhere, a standard VIII student originally from Beed district. “And some teachers discriminate between migrant and ‘proper’ students.” The experience, though, hasn’t coloured the ambitions of the 14-year-old, who wants to be a teacher.

Even when migrant kids do get enrolled into schools, learning outcomes are a challenge. “I changed schools often; I had trouble completing portions and it was hard to remember and understand what was being taught,” says 12-year-old Samadhan Varat. Why this happens is hardly a mystery.

“Many migrant students are fidgety in the classroom. They have not been exposed to pre-primary education and, probably as a consequence, have never learned to sit still,” says Sameeksha Milind, a clinical psychologist with DEGC. Migration affects developmental milestones, she adds, and migrant students generally have lower academic capabilities and often suffer from undiagnosed learning disabilities.

There were anxieties on the parents’ side as well. Many feared their children would not be safe going to school alone and some parents had signed up their kids as farm labour and taken advance payments for this. Meanwhile, older girls were often forced to stay back and handle household chores. A change in mindsets was essential.

The village mobilisers counselled the students and escorted them to school and back. Storybooks and study material were distributed and, where possible, exemptions were obtained from schools to, for instance, allow students to bring along younger siblings in their care. The mobilisers also conducted classes for kids in their villages, provided halogen lamps to migrant families, conducted vaccine camps and distributed menstrual hygiene products. 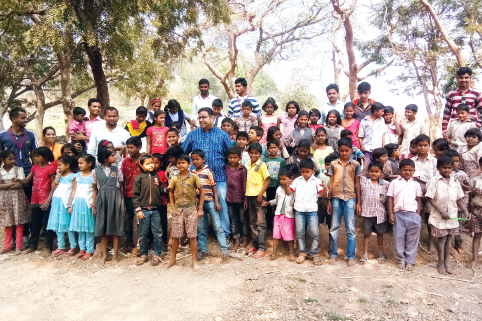 The DEGC team has distilled its experiences with the programme into a model called ‘migrant friendly villages’. A range of points are covered in the model: sensitising local government bodies, schools and village residents; connecting migrant families to their food, health and education entitlements; and socioeconomic interventions that can ease the migrant child’s path to the classroom.

Mr Manohar says that the DEGC initiative has established the complexity and interlinkages involved in educating migrant children. “You cannot help these students learn by simply shepherding them into schools,” he says.