For evidence that technology can be a potent tool in bettering the lives of India’s disadvantaged, look no further than South Odisha, home to one of India’s poorest communities and the setting for an Agri-GIS (geographic information system) application that is delivering in spades to farmers with small land holdings.

Take Bana Kumbruka, a 50-year-old marginal farmer from Pichiliguda village in South Odisha’s Rayagada district. The agricultural advisories Mr Kumbruka gets on his smartphone have changed his life and future prospects. That’s a far cry from what it used to be.

Until a few years ago, Mr Kumbruka struggled to make a living from his 1-acre plot and the story was similar for thousands of small farmers like him. High crop mortality, ignorance about scientific farming techniques and fickle weather would conspire to undermine their labour. Countless farmers from across the backward and predominantly tribal districts of Odisha have had to, consequently, give up on agriculture and migrate to wherever they could find daily-wage work.

A silver lining in this dark cloud appeared in 2017 in South Odisha, a region comprising 10 districts, thanks to an initiative that enables farmers to improve their lives and livelihoods through the use of Agri-GIS, which basically is a suite of agriculture-related applications that rely on satellite imagery, spatial analytics and more to enhance farm-dependent incomes.

The Agri-GIS app has since its launch reached about 150,000 farmers from 532 villages in the Kalahandi, Kandhamal and Rayagada districts of South Odisha. It was developed by the Bengaluru-based Centre for Spatial Analytics and Advanced GIS (C-SAG), a collaborative effort involving the Tata Trusts, the National Institute of Advanced Studies and the Bill and Melinda Gates Foundation.

C-SAG’s larger goal is to increase farmer incomes while supporting the sustainability of small farmers. It generates advisories for farmers that are specific to their plot of land and the crops they grow. The Agri-GIS app is an example and it includes crop recommendations based on soil type, right time to sow, weather advisories and best practices in agriculture.

“Agri-GIS is about upping farmer incomes through cropping and allied agricultural activities,” says Sneha Dicholkar, a programme manager with the Tata Trusts, “and it encourages them to adopt sustainable agriculture practices.” Using digital technologies to accelerate social change is another objective here.

Putting the farmer at the centre of its data and analytics stack has been the key differentiator in the Agri-GIS programme. That means collating and analysing varied and voluminous data and aggregating them to create easily understood advisories.

Before the data and science could be put to beneficial use, the Tata Trusts team had a critical precursor to go through: getting farmers to listen and get on board. The implementation team invested plenty of time in educating villagers about the advantages of the app and its benefits.

Tracking and evaluating outcomes has been a priority for C-SAG. It established a feedback cycle in 2020 to understand the impact of Agri-GIS on the ground. The findings were more than encouraging.

From a sample size of 1,222 farmers, over 40% trusted Agri-GIS and adopted the crop recommendations, 98% accepted the weather advisories and cropping practice recommendations, and 88% saw a positive impact thanks to the advisories, either in terms of cost savings or better incomes.

The numbers are good news for C-SAG but the lives impacted are better still. “The advisories helped me improve my knowledge and have yielded promising results for me,” says Dulu Pidikaka, a farmer from Dhobagudi village in Rayagada. “I have shifted to cultivating cowpeas, brinjal and chillies and the outcome has been good.” 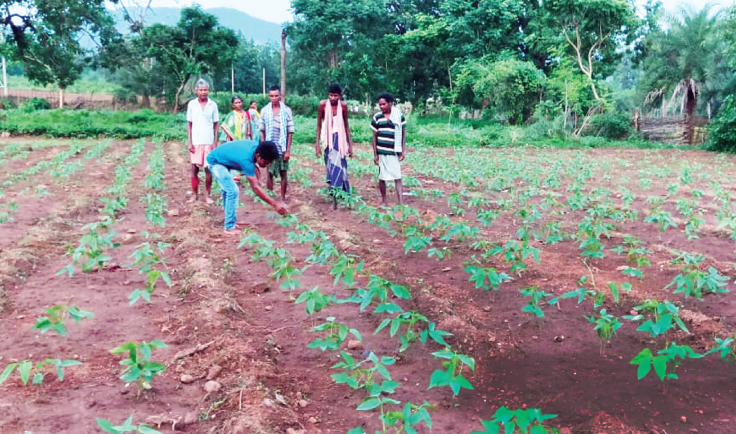 A farmer collects a soil sample for lab analysis, information that will then be integrated into the Agri-GIS app

There’s a huge quantum of work that goes on at the back end in order to make information generated by the Agri-GIS app easily available and understood by farmers.

Information about crop status, land and water availability comes from a variety of satellites. Weather forecasts are assembled from different sources on a daily basis and shared with farmers as advisories. High-end image analytics deliver weekly water- and crop-status reports at the plot and village level. Advanced meteorological forecasts do a similar job with respect to the weather.

Suitability analyses determine the optimal crops for each plot of land, based on soil, climate, terrain conditions and the social and economic status of the farmer, while pinpointing best practices and recommendations for every plot and also for different stages of the farming cycle.

Beneficiary analytics forecasts what benefits, such as income or assets, a farmer can expect to receive. And market analyses recommend the best access pathways and pricing at different levels. All this is integrated into the final advisories that farmers receive on a daily basis.

Advanced data engineering principles are adopted to collate a geo-database that consists of 104-plus parameters. Some parameters are updated daily, some on a monthly basis and others less frequently. All of these form part of the massive geo-database for the 532 villages in the programme.

The datasets are designed in such a way that they can be disaggregated to create plot-specific information and spatially analyse this to generate advisories for each farmer. It can also be aggregated to generate quick policy dashboards at the village, subdistrict and district levels for governmental information requirements.

The analyses generate insights about individual plots of land or a village and become part of the intelligence that Agri-GIS employs to conduct future studies.

A suite of 16 apps has been developed to serve different Agri-GIS requirements for field and for backend operations. For instance, farmers can use the plot-level soil sample app, the crop mapper app, the facilities mapper app and various dashboards to access and update critical crop data. Government agencies can use the Agri-GIS portal to access the data of any specific plot.

Clearly, Agri-GIS can create a wave of technology-supported agriculture in the country. “It has shown an end-to-end capability in this regard," says Mukund Rao, chief executive of the Bengaluru-based Centre for Spatial Analytics and Advanced GIS.