By restoring their commons, these villagers of Khakhra Khuna near Udaipur in Rajasthan have sufficient fodder for their cattle, enabling them to increase their herd size and improve incomes

Kundanali village in Odisha’s Angul district nestles in a forested stretch between the Panchadhara hill range and the Mahanadi river. With fertile soil and green vistas, this is a place that oozes idyllic charm. There was a problem, though, with the picture-perfect setting — Kundanali once had to battle a crippling water crisis.

Local farmers, struggling with limited access to groundwater and a 2-km walk to the river to otherwise find the prized liquid, found it difficult to irrigate their land. “We dug some tube wells but nothing worked,” says Niranjan Hota, a villager.

The obvious solution would have been to construct rainwater reservoirs or ponds on the community’s shared lands. But in rural India, ideas like these are often nonstarters because most villagers do not have legal rights over what is called ‘commons’, a term that refers to the natural resources — forests, pastures, rivers and other water bodies — adjoining their lands.

India’s commons cover about 205 million acres and sustain around 350 million people with fodder, fuel, forest produce, fish, bamboo and much more. Lack of clarity on the ownership of these commons has led to the tragic neglect of resources that are vital to communities.

Worse still, these resources are easy targets for illegal appropriation and exploitation, including land grab, theft of timber and poaching. They are also vulnerable to calamities such as landslides and forest fires.

When it comes to water in unprotected commons, losses lead to falling agricultural yields and increased costs for farmers. This fuels distress migration, inequality and greater pressure on communities, especially women and marginalised sections.

Kundanali has been able to cope, even thrive, thanks to a programme that lives up to its name. Seeded and implemented by the Foundation for Ecological Security (FES), a Gujarat-based nonprofit that has been supported by the Tata Trusts since 2019, ‘Promise of the Commons’ aims to help villages become sustainable by securing tenure and improving governance of their shared resources.

In Kundanali, FES teamed up with villagers in 2020 to build four ponds on common lands. These ponds now meet the needs of 1,200-plus people, enabling farmers here to grow two crops a year instead of just one. “Prosperity has come to our village as a result,” says Mr Hota.

Such welcome words are a booster for FES, which works for the restoration and conservation of land and water resources in ecologically fragile, degraded and marginalised regions of India through the collective efforts of village communities. Over the past few years, FES, along with more than 100 NGOs and in partnership with seven state governments, has helped conserve 12.5 million acres of commons across 13 states, cumulatively benefiting nearly 25 million people.

The commons issue is a colonial legacy. It was during the British era that the state began to exert its rights over India’s common lands. Prejudice was at play here, beginning with the belief that rural communities were incapable of managing their commons. Unfortunately, this thinking — and the regulations born of it — continued after Independence.

The consequences have been ruinous for rural India, and directly responsible for a bunch of its ills. It has eroded the agency of village communities and institutions and has had deleterious effects on ecology, the economy and development planning. 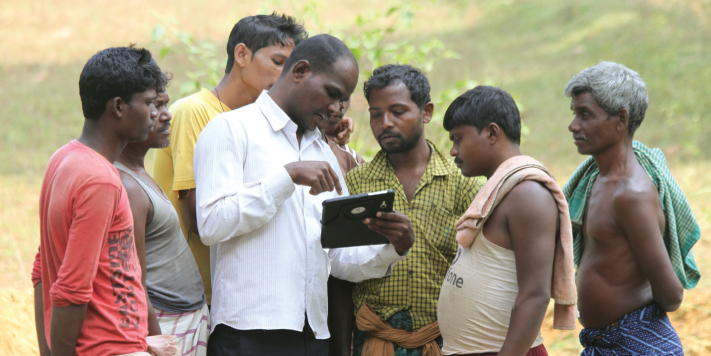 Laws to the rescue

Change had to come and it duly did. From the 1990s onwards, laws supporting community-led restoration of commons were enacted, among them the Panchayati Raj Act, the Panchayat Extension to Scheduled Areas Act and the Forest Rights Act. The Mahatma Gandhi National Rural Employment Guarantee Act (MGNREGA) is another enabler in this context (through it around $5 billion is spent annually on restoring natural resources).

In rural India, ecology, economy and community are interlinked and have to necessarily be considered together. That explains FES’ three-tier strategy: guiding communities through procedures to secure land rights; enabling collective action for responsible and inclusive resource management and governance; and unlocking access to public funds.

Getting all these pieces in place is far from easy, as is evident from FES’ work in Mukundgarh, a village in Rajasthan’s Bhilwara district. Among the difficulties faced by Mukundgarh’s residents was the damage caused to their crops by stray cattle and nilgai (Asian antelope). The solution: develop common village and forest lands, about 70 hectares in all, into fodder-rich pastureland for strays and local animals.

The outcome was impressive. Crops suffered far less damage from foraging animals, groundwater levels improved thanks to the added green cover, and equitable rules governing the pasture’s usage ensured that fodder from the commons was available even to the poorest cattle-owners. “Rich or poor, every villager could ask for their rights with confidence and dignity,” says Durga Singh Saktawat, who worked with FES on the project.

Community rights are crucial in the context. FES strengthens the capacity of rural institutions like gram panchayats (village councils) and commons development committees to function in a democratic and transparent manner. It also negotiates for fair representation for women and marginalised and backward communities.

FES has raised a grassroots army of 1,100-plus community resource persons (CRPs) to conduct door-to-door surveys and inform community members about the importance of securing tenure over their commons. Nearly 40% of them are women.

When FES’ teams and community workers have conversations with villagers about ecology, rights and livelihoods, they carry with them a suite of technology tools built in-house by the organisation’s India Observatory team.

Using public and private data sets, the team has built geospatial layers of 1,600-plus data sets. This makes it possible for communities and decision-makers to check ecological and socioeconomic data, from census and agriculture information, to rainfall, groundwater, schooling, health infrastructure and more. The insights thus gained inform the planning of commons restoration projects.

Take, for example, the ‘composite landscape assessment & restoration tool’ (CLART), which displays location-specific information about ground or surface water availability in a simple, colour-coded format that anyone can follow.

The ‘design estimate tool’, used in conjunction with CLART, helps prepare the proposed engineering blueprint as well as the cost and labour estimation for the project (for a pond or rainwater harvesting structure, for instance).

Another more-than-useful tool is the ‘groundwater monitoring tool’. This has been employed to measure and track pre- and post-monsoon water levels in 35,000 wells in different parts of India.

Says Ashok Jani, who heads India Observatory: “Our objective is to organise rural data into public assets that everyone — governments, NGOs and local communities — can use.”

Urmila Behera from Kashinathpur in Angul is one such resource person. Before her training, Ms Behera understood little about the issues facing her hamlet of 150-odd residents. Today she deftly navigates forest roads on her bicycle, monitors well-water levels and tells people how to budget for water usage. “We explain that forests support our livelihoods and that is why communities must support conservation,” she says.

Says Asha Suthar, a resource person from Dolpura in Bhilwara, Rajasthan: “Earlier, four-five men from the village would convene meetings and decide everything. Now we have a few women showing up for these meetings. Many of them still hesitate to speak, but at least they are aware of the issues.”

By increasing representation and economic opportunities in rural households, Promise of the Commons has laid out a roadmap for the conservation and better governance of India’s shared resources. FES, for its part, aims to secure tenure over 30 million acres of commons and reach 38 million people. That should spur a groundswell of action to restore India’s commons to its rightful owners — rural communities.