An all-woman batch of 20 electrician trainees from an ITI in Thane, Maharashtra, during a single-day industry exposure programme

Unlike so many of his age group, 23-year-old Mohammed Shakeel has a career path mapped out. An electrician by training, Mr Shakeel works as a technician with the Bihar State Electricity Board and has recently cleared an exam that will certify him for employment as a junior engineer. It’s a dream career, says Mr Shakeel, and he owes it all to the training he has received.

Mr Shakeel has been skilled through the ‘dual vocational education training’ (Dual VET) programme, a joint effort by Tata Strive, which operates under the aegis of the Tata Trusts, and Siemens to provide technical education to young jobseekers in five Indian states. There is no understating the need for such initiatives at a time when unemployment numbers are rocketing.

India’s education system is often disconnected from the realities of the job market. Dual VET aims to bridge the chasm by bringing a higher order of industry-aligned skilling to prospective employees. ‘Dual’ here refers to the blend of practical and theoretical learning that makes the initiative effective in meeting industry needs.

“The programme introduced us to modern machines and the systems used by industries. This made us more confident as jobseekers,” says Mr Shakeel, who came through a Dual VET course conducted at an Industrial Training Institute (ITI) in Harinagar, New Delhi.

India has a vast network of ITIs, with around 15,000 government-run and private institutes teaching trades such as electrical, welding, fitting and machining. However, the system has atrophied over time, with outdated teaching methods and inadequate importance being given to training in industry settings.

Tata Strive, with help from Siemens, is using Dual VET as a vehicle to revamp pedagogies and practices at 196 government-run ITIs across India. Nearly 44,000 youth have passed through the programme — currently operational in Delhi, Maharashtra, West Bengal, Gujarat and Punjab — since its launch in 2017.

What makes Dual VET stand apart in the skilling sector is that it enables students to gain valuable experience through 30-60 days of hands-on training every year on the shop floor. This ‘industry connect’ facet is vital, given that it addresses the unemployability crisis at ITIs while creating a pipeline of skilled workers for micro, small and medium industries (better known as MSMEs). 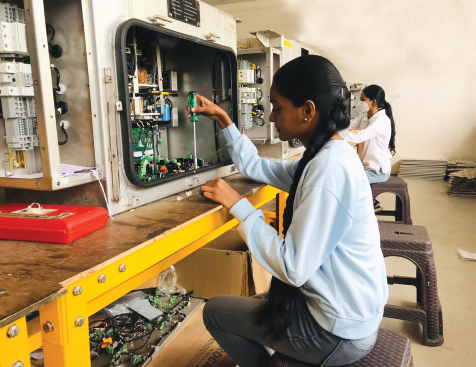 Sunitha, an electrical trade student from a Mumbai-based ITI, does her in-plant training at a control panel manufacturing firm based in the city

Shivangi Gupta was the only woman electrician-in-training at her Industrial Training Institute in Narela, New Delhi. That was not much of a hurdle for this young and ambitious woman, who has progressed to joining the public sector Bharat Petroleum Corporation in her native city as an apprentice technician.

Ms Gupta’s job has helped her parents reconcile with the fact that their daughter wanted to work in a male-dominated space. The lady herself credits the Dual VET programme with giving her much-needed industry exposure and the confidence to perform well on the shop floor.

Ms Gupta learned the technician trade in the classroom and from training stints at different industrial units. “The in-plant training I received has enabled me to learn about what industry expects of people like us and it has also prepared me to handle projects independently,” she says. “Dual VET creates well-rounded professionals who are welcomed by industries.”

The experience has boosted her confidence. Ms Gupta now aims to clear the Graduate Aptitude Test in Engineering (GATE) and become an electrical engineer. “There are very few women in technical fields and I feel happy about setting an example for others.”

To strengthen the link between workplace and workforce, Tata Strive has signed up with more than 1,500 industry partners. A third of these have started accepting Dual VET students and some 2,800 candidates have undergone in-plant training as a result.

Dual VET got off the ground in 2015 following a meeting in Germany between representatives of Tata Sons and Siemens. An agreement was reached on bringing the German model of Dual VET, which has a tried-and-tested framework, to the country. The partnership was a good fit, with Siemens bringing its rich experience of the German skilling model and Tata Strive complementing this with its aspirations of reimagining vocational education in India.

As a first step, Siemens set up a technical academy — a lighthouse centre as it was called — in Mumbai in 2016 to train candidates in-house. But a single centre was never going to be enough. The Tata Strive-Siemens team realised that a multiplier effect could be fashioned by tapping into and upgrading the ITI ecosystem. That vision triggered the public-private partnership model that now powers the programme.

To make the partnership work, Tata Strive ensured that the training prototype fitted in seamlessly with the ITI course framework prescribed by the central government. This made it easier for students as well as instructors to adopt it. “We are innovatively disrupting the technical education system in India, but without creating any upheavals in the system itself,” explains Anita Rajan, the chief executive of Tata Strive.

“Working with the ITIs helped us scale up the concept and contribute to the Indian government’s ‘Skill India’ and ‘Make in India’ programmes in a significant way,” adds Manmohan Koranga, head of the Siemens Technical Academy, while underlining the value of the collaboration.

The Dual VET mission has not been easy to accomplish. Most ITIs are riddled with inefficiencies. Quality instructors, machine tools, computer infrastructure and safety equipment are often unavailable and there is little knowledge-sharing between faculty and industry. ITI students receive scant support to secure apprenticeships, which impacts their job-readiness upon graduation.

To get around these challenges, the Dual VET team decided to tie up with state governments. In 2016, the team signed a memorandum of understanding (MoU) with the Delhi government, making it the first state to come on board. Similar MoUs were signed with Maharashtra in 2018, West Bengal and Gujarat in 2019 and with Punjab in 2021.

Having the state governments as stakeholders has proved useful in ironing out operational wrinkles. “Often, even senior officials are unaware that certain infrastructure, tools or safety equipment are defunct or missing,” says Ms Rajan, “We inform them of these gaps and ensure that the ITIs meet the prescribed standards.”

Another issue that needed tackling was the upskilling of instructors, many of whom were reluctant to deviate from the prescribed curriculum. It was crucial to get them to believe in the Dual VET idea and the team responded by focusing on training them in the new pedagogy as well as in safety aspects.

The pedagogical pivots were the introduction of inquiry- and project-based learning (IBL and PBL). These methods, previously unheard of at ITIs, meant students would learn through questioning and having to find their own answers.

Debdas Maji, a fitter instructor at an ITI in Durgapur, West Bengal, says that students, especially the less confident or motivated ones, learn faster through IBL and PBL. “Rather than give them the answer, we ask them to do their own research,” he says. “And very often they are able to come up with the right answers.”

The Tata Strive team also worked to strengthen the industry connect part of the equation. The team has established relationships with local industries so that students can experience learning in real-life situations. Instructors are encouraged to visit industrial units to keep abreast of the latest developments and to get feedback from students working at plants.

Top of the class

Delhi and Maharashtra have recorded the biggest success stories when it comes to in-plant training sessions under Dual VET, while pedagogical training has been the focus in West Bengal, Gujarat and Punjab. Delhi alone accounts for more than 2,000 in-plant trainings (out of 2,800). The high numbers are because the state government has invested in procuring safety equipment and insurance for ITI students.

Dual VET has found acceptance from beyond the student community. Yogesh Patil, joint director of Maharashtra’s Directorate of Vocational Education and Training, says that there is a sea change in the way organisations respond to ITI candidates. “Earlier, they were hesitant to let inexperienced students operate costly equipment,” he says, “but now these very industries are coming forward and asking for more trainees.”

Tata Strive aims to take the Dual VET programme to other states as well (agreements are about to be inked with three more government partners: Uttarakhand, Jharkhand and Kerala). And while challenges remain — infrastructure, safety and red tape — the Tata Strive-Siemens team remains confident about realising its objectives.

“There was an urgent need for a mindset change at all levels, from government leaders to ITI faculty. Triggering that change has been our greatest achievement,” says Ms Rajan. 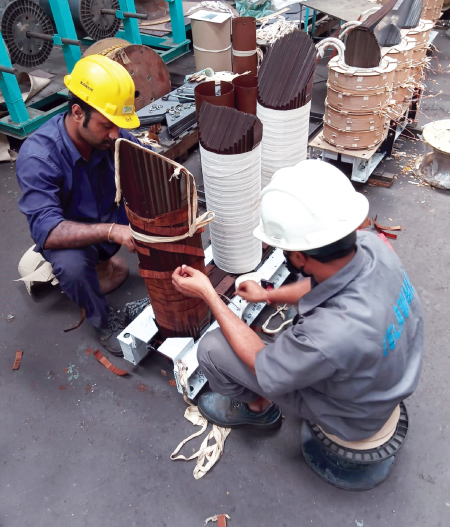 ITI students get a feel of what the job entails