PI Pawar, a farmer from Hadgaon village in Maharashtra's Parbhani district, with his harvest-ready onion crop

Peek Pahani, the age-old practice of revenue officials visiting farmers to record information on crops grown, has taken a digital turn for the better in Maharashtra

Every year during the sowing and harvest seasons, Vishnu Sonavne would trudge nearly 30km a week on foot from one village to another to carry out an important, if cumbersome, task — the collection of farming data in the old-fashioned way.

Mr Sonavne is a talathi (village revenue officer) in Maharashtra’s Aurangabad district and his job entailed physically observing and recording the crops sown by each farmer on his list. The data he gathered would then become part of India’s massive crop-reporting exercise, which informs the agricultural economy as to how many farmers are growing which crop and how much of it.

“Irrespective of the weather, I would walk for hours on end to cover all the survey numbers for crop reporting,” says Mr Sonavne. That changed in 2020 when the archaic, and often inefficient, practice known in Marathi as peek pahani (or crop survey) was digitised for the Maharashtra government by the data-driven governance team of the Tata Trusts. The result — a first-of-its-kind mobile app called E-Peek Pahani (EPP).

Started as a pilot in nine talukas (administrative divisions) in eight districts, EPP is now being used in all of Maharashtra’s 43,000 villages (this after it was launched across the state in August 2021). Farmers are now self-reporting their crops and farm infrastructure through the app, which has a feature that enables uploading of geotagged photos of what is being grown.

The data is analysed at an EPP lab set up in Mumbai by the Trusts, and the reports generated go to government officials for due diligence and record keeping. “I now have all the crop reports with proof on my computer, and I don’t have to walk a single step for it,’’ says Mr Sonavne.

A hit with farmers

The farmers being surveyed are happy, too. One of the beneficiaries is Laxman Deshmukh, a farmer from Mohadi village in Nashik district. He has been using the app to log sowing, planting, irrigation and other data during the kharif (monsoon) and rabi (winter) seasons. “It saves a lot of time and results in accurate, photo-assisted recording of the sown crops,” he says.

The EPP app has brought reliability and efficiency to Maharashtra’s agricultural reporting mechanism, and has delivered unexpected benefits as well. One is capturing data on many more crop varieties. Manually collected data was limited to fewer than 30 crop varieties. The app has removed that constraint. Today, farmers are reporting more than 200 varieties of produce, including ‘foreign’ produce such as broccoli and Chinese cabbage.

The mentor behind the EPP project is Jayant Kumar Banthia, a retired bureaucrat who was India’s census commissioner from 1999 to 2004. Dr Banthia is no stranger to the challenges of collecting and crunching large data sets. He says that EPP was created to address the biggest pain point of the previous system: accuracy.

“Crop data in India is so dynamic that the government is incapable of collecting it without the farmer’s help,” he says. “EPP addresses this gap by allowing users to share information, and that has been a big win.”

The lack of timely and high-quality data on farm output has long been a bugbear for economists and policymakers across India. In many parts of the country, village revenue officers make the rounds of farmers’ fields three times a year to take stock of what they are growing. Besides being unreliable and time-consuming, the process also causes delays in reporting. This renders the exercise highly inept, often bordering on meaningless.

Dr Banthia highlights how the lack of dynamic and real-time recording of crop data has hit Indian farmers hardest. One of the biggest challenges facing farmers is getting compensated by the government for crop losses. “This reporting system was begging to be digitised. Farmers cannot wait for years before being made good for their crop losses,” he says.

The EPP project began in 2018 after the Trusts got the go-ahead from the state government’s revenue department to implement what is a unique self-reporting programme for farmers. Nine talukas were brought under the digital umbrella and the app itself was built by a third-party vendor to specifications provided by the Trusts. 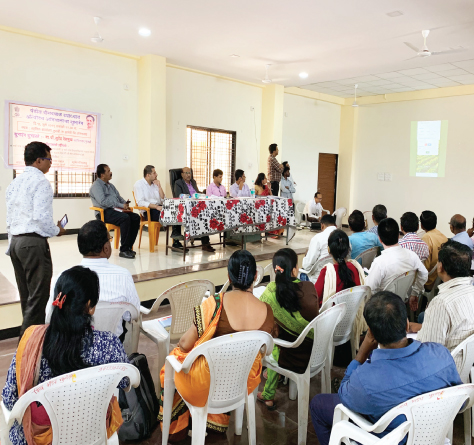 Aunique feature of the E-Peek Pahani mobile application is its geotagging feature. This does away with the need for manual checking by the village revenue officer. The advantages here are multifold.

Geotagging cannot be falsified because there is pictorial proof, with locations embedded in the photos submitted. These meet the requirements of various government departments, be it agriculture, irrigation or horticulture. Down the line, buyers such as sugarcane cooperatives also get accurate data as well as prior information about crop volumes.

“With this technology, farmers have bypassed the middleman and become the central stakeholder,” says Sachin Ralhan, a programme manager with the Tata Trusts.

In times of natural calamity, the farmer can tag the photos of the damaged crop and it serves as testimony for verification (previously done physically by a government official). “Having pictures is also helpful when farmers have to connect in real time with the state government’s helplines,” adds Mr Ralhan.

Building the app required a leap of faith. Using crowdsourcing as a means of data collection and making the farmer the central stakeholder in the process of crop reporting was a huge step. This had never before been attempted in India and success could not have been achieved without the full support of the government machinery.

According to Sachin Ralhan, a programme manager with the Trusts, the ingenuity of EPP was not so much the technology but the strategy powering it. “Establishing ownership with the state government right from the beginning has been a major reason for the scaling up and sustainability of the EPP effort,” he says.

The Trusts started with small steps. Karanjpada and Hamrapur, two villages in Maharashtra’s Palghar district, were chosen to test the app and programme design. The participants included farmers and talathis. A dedicated EPP helpline was set up to assist users.

A crucial need from the technology was that it had to be easily usable by farmers. The EPP app was modified during testing to ensure that farmers with little tech knowledge would be able to handle it. This was done by ensuring that the farmer has to do close to zero typing, and that the language input is limited to simple Marathi.

Farmers caught on quickly. “Before we knew it, they became savvy with their reporting,” says Mr Ralhan. Instrumental in the initiative taking off was the smartphone. Most of the farmers involved already had one, those who didn’t managed the task with a friend’s phone.

The technology used in the app cuts the time taken to process data from years to just days. One example is the GIS (geographic information system) tool embedded in the app. This enables farmers to geotag their crops, making the data authentic and real time enough for a quick response by authorities where required (see Clear-cut evidence).

The EPP app delivers other benefits for farmers. It helps tracks market trends and tells farmers which crops they can plant in order to connect directly with the market and get the best possible price for their produce. For instance, in Undangav village in Aurangabad’s Sillod taluka, some 250 farmers have used the app to sell maize at purchase centres where the authorised price support system is in place.

Another standout feature of EPP is that farmers who lose crops to unseasonal rains and for other reasons can register the damage by taking photos through the app. Nagorao Kadam of Mudkhed in Nanded district says that farmers are now getting compensated by the government more swiftly for crop damage. “I hope more farmers are able to use EPP in the future,” he says.

For the EPP team, the project has led to unexpected insights. As farmers began using the app, more ‘unusual’ produce began to feature in the list. “Farmers are no longer dependent only on traditional crops,” says Dr Banthia. “They are growing cherry tomatoes, dragon fruit and exotic grapes because these fetch better prices in the market. It was only when the team saw those pictures that they realised the precise source of the exotic vegetables sold in urban centres such as Mumbai and Pune.” 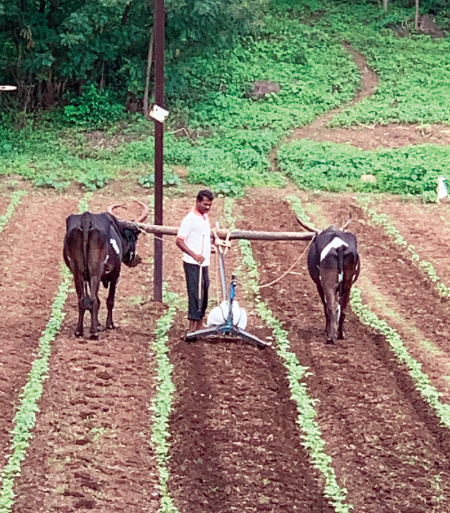 A farmer at work in Phulambri, where use of the EPP app is widespread

EPP’s robust success is the reason why the Maharashtra government has expanded usage of the app to cover the entire state. Other states are making enquiries that suggests EPP is poised to go places. An important factor driving the attraction is the app’s scalability.

EPP is modular and has the ability to fit into any governance system. It can be linked, for example, to various government schemes, to insurance providers and to sellers of seeds and fertilisers. By eliminating conventional intermediaries — brokers or tradespeople who take a major chunk of the profit — farmers can sell directly to the market and get better prices.

EPP serves as a model for data-driven governance and systems reengineering programmes across the world. By replacing an antediluvian crop-reporting system, the EPP project holds out promise for what has seemed like a ghost for long — the revival of India’s farm sector. 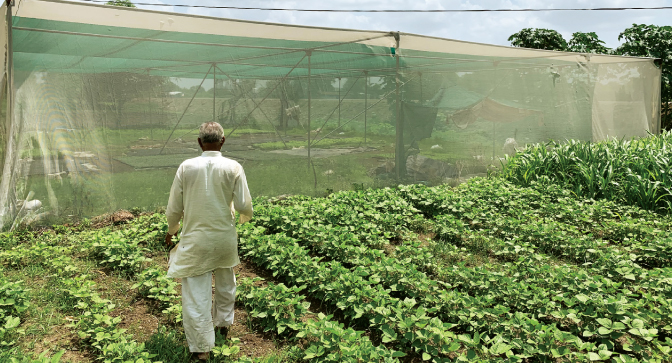