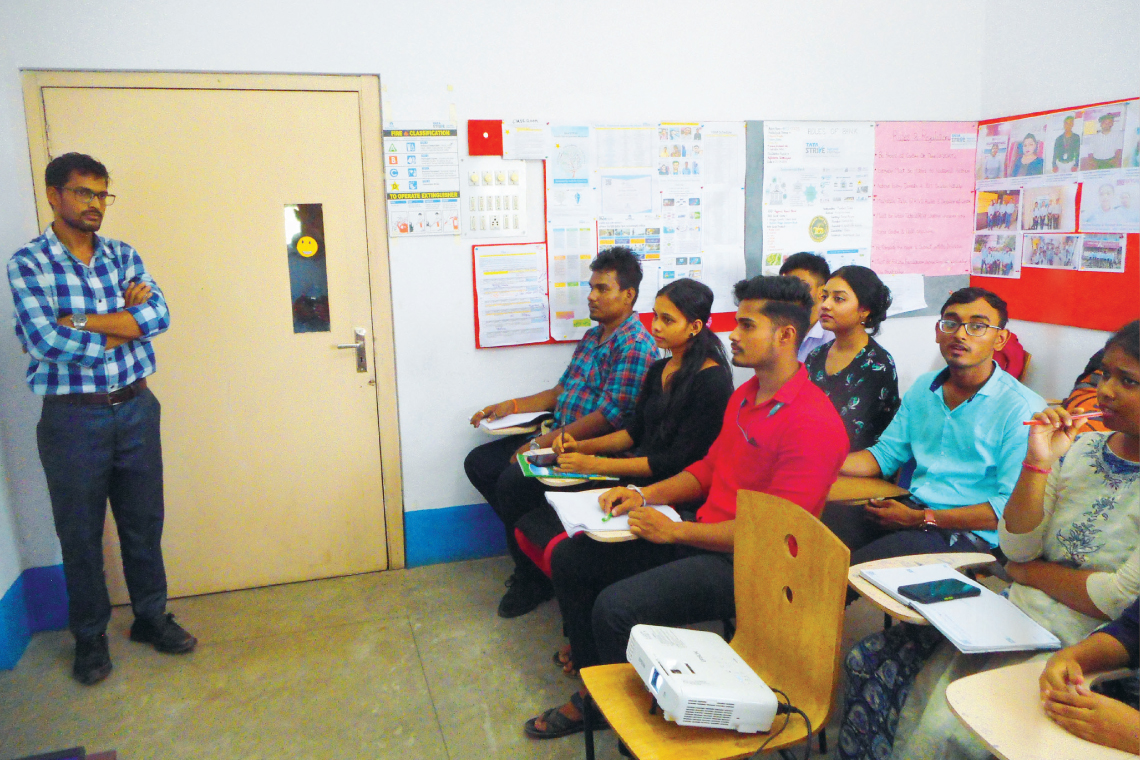 Bachchan Mondal had always wanted to join the Indian Army but the 29-year-old from Karimpur in West Bengal’s Nadia district could not pass the mandatory entrance tests. “I spent years trying for a job in the defence services,” he says. “I kept failing the tests and became disheartened. I began feeling I wasn’t qualified to do anything at all.”

Then earlier this year two friends told Mr Mondal about an opportunity — a ‘game’ that could tell him what kind of profession he was best suited for. “They had played the game and, as per the results, realised becoming security guards was the best possible employment option for them,” says Mr Mondal.

The name of this 'game' is Karmadisha and it is actually an app created by Tata Strive, a skill-development initiative of the Tata Community Initiatives Trust, which is a part of the Tata Trusts. Karmadisha was crafted for the West Bengal government, specifically the state’s nodal skilling agency, the Paschim Banga Society for Skill Development (PBSSD), to help young jobseekers understand how they can find employment that is in line with their interests.

Karmadisha addresses the pressing need to skill India’s youth for employment and entrepreneurship. For people like Mr Mondal, who have repeatedly failed to get into a profession of their choice and go into deep despair over that, the app shows them the light at the end of the tunnel — an alternative career they may not have considered which can be both successful and fulfilling.

In March, Mr Mondal played the game and his results indicated that he too could become a security guard. If he completes his current, on-the-job training satisfactorily, he should find gainful employment soon.

“Our research shows that when people choose courses in which their interests lie, they stay on the job for longer,” says Anita Rajan, the chief executive of Tata Strive. “We have even created an ‘interest inventory’ that gives evidence of this. Candidates click on responses based on whether they like something or not, and out comes a code which puts them into a specific category and enables us to then advise them further.” 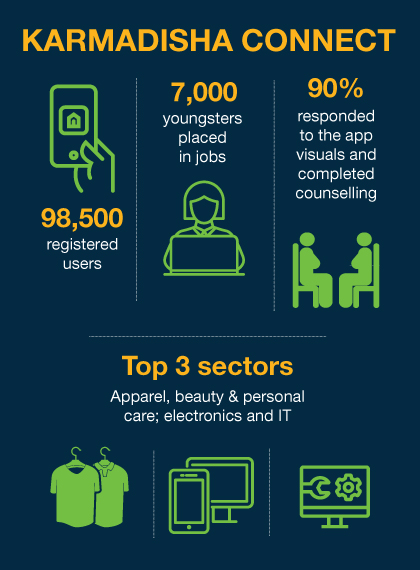 For the unlettered as well

The app, which was introduced in November 2021, is simple enough to navigate, and it works for the unlettered as well. Once jobseekers download the app on their phone and registers themselves, they goes through a series of easily-identifiable workplace-related pictures and indicates her interest in each of them. This is followed by a few questions by a chatbot to validate their interests.

Once this is done, a code is generated based on their responses. This indicates their job aptitude and which profession they may be best attuned to. The PBSSD-Tata Strive team then provides additional counselling to the jobseeker and facilitates classroom and on-the-job training.

“In India many young people, especially those from disadvantaged backgrounds have no direction to their lives,” says Ms Rajan. “They don't know what to do even if they’ve studied till Class X. How can they make decisions if they don't know what they like doing?”

Typically, for this socioeconomic group there are no career counselling facilities available in the schools they go to. So, unaware of their choices, they may blindly follow others — or be pushed by their families, in the urgency of finding employment — to pursue a profession they are neither interested in nor have the talent for. The Karmadisha app aims to keep them informed and improves their self-awareness on the possibility of various careers.

It is modelled on a scientifically proven theory called the Holland Code Career Test, named after American psychologist John L Holland, who invented the RAISEC evaluation scale. This segregates candidates into broad personality types — realistic, artistic, social, enterprising and conventional — based on their responses to a detailed questionnaire.

Since the pen-and-paper model [of the Holland Code] would not have worked in India because disadvantaged children have a variance in education and literacy levels, Tata Strive created the picture-based tool where the visuals explain everything.

There may be a visual of a carpenter working with tools or a nurse checking someone’s blood pressure. The person seeing it has to respond with a ‘like’, a ‘dislike’ or a ‘maybe’. It must be an instantaneous response, made without too much of thought. The questions accompanying the visuals are currently in three languages (Bengali, Hindi and English) and can be customised depending on the demographic it is fashioned for. 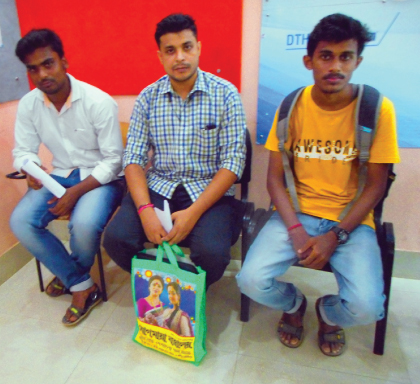 The app's visuals are generic enough for candidates all over the country to grasp. Those who can read could be served by having the questions and statements written in their mother tongue. The opportunities for the adoption and scaling up of the app across multiple states are immense. The lack of awareness about career options, thanks to the absence of counselling (except in the schools of the privileged), is widespread across India’s socioeconomically weaker communities.

In Bengal, candidates often refer to the Karmadisha app as a game, which makes them more amenable to play it. Poornima Haoli, who lives in Canning, a town about 60km from Kolkata, studied till Class III; she never finished school because she was married at 14. “I can read very little so the visuals in the game were helpful,” says the 27-year-old who has an 11-year-old son. Ms Haoli’s assessment outcome has led her to undertake training to join the housekeeping staff of a Kolkata mall.

More than 98,500 people have registered on the Karmadisha app and about 90% of them have responded to the questionnaire and completed the career counselling. User experience, coupled with the mobilisation process — where the government puts the word out and invites young jobseekers to congregate at a venue to use the app — have helped achieve these high numbers.

PBSSD focuses on placement-linked mobilisation, where enrolments are done and where there is an assurance of finding some sort of employment. Some 7,000 youngsters have been placed in jobs thus far, with the top three sectors being apparel, beauty and personal care, and home furnishing (which translates into tailoring, hand embroidery and sewing-machine operators); electronics and hardware (field technicians or in computing); and in the IT domain (mainly data-entry operators).

When Tata Strive approached the West Bengal government for Karmadisha, they decided to deploy it across the state. During the Covid pandemic a lot of youngsters had fallen out of the learning circle. Since physical meetings were unlikely to happen, the government urged Tata Strive to make this an online tool that could be operated remotely. The chatbot was used to replace face-to-face sessions with a counsellor and make it all the more digital.

Once the app was ready, PBSSD went into mobilisation mode, inviting jobseekers to specific venues to come and try it out. The government has, till now, organised several job fairs and, through local and district-level officials, gathered people in villages as well to try out the app.

Of the 89,030 candidates who have gone through the Karmadisha app, 38% are junior college students looking to get some direction — or confirmation — about the profession that’s best for them. Graduates and postgraduates comprise 27% of those taking the test and another 27% are, interestingly, students between Classes VIII and X.

Decades of businesses and capital taking flight from West Bengal to other parts of the country has bred a willingness among young jobseekers to relocate for employment. This may explain why 25% of male candidates and 17% of female candidates are ready to migrate to another state if they find a good job there.

Then there are people like Arpan Das, a soft-spoken and educated 20-year-old who is training to become a security guard. Having done two years of college before being forced to quit for family reasons, the Kolkata resident is clearly overqualified to be a guard. Shortly after he dropped out, he became an insurance agent and later joined a forex firm. But the company he worked for closed down during the lockdown and Mr Das, being the sole breadwinner in his family, was desperate to be employed.

“I was floundering when friends told me about the Karmadisha app,” he says. He attended a mobilisation programme, took the test and is now on his way to getting a job. While grateful, Mr Das admits that this is perhaps a stop-gap arrangement. “I don’t mind being a security guard…for now,” he says. “I wasn’t able to find a job for a long time and I had to get something quickly because of my family’s financial situation.”

His parents are asking him to concentrate on the work at hand, but somewhere deep inside Mr Das believes he can do better. And he as a plan. “I could play the game again a few years down the line to see where I stand,” he adds. The outcome is unlikely to change, but at least Karmadisha has made Mr Das aware of a world of career possibilities out there. 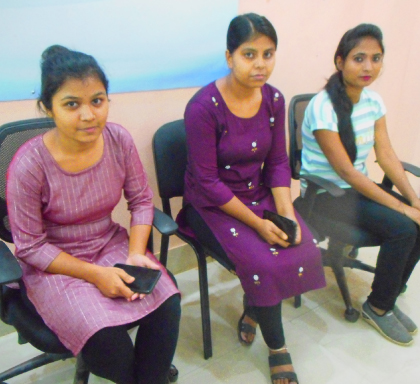 Candidates undergo counselling, and classroom and on-the-job training before placements