Access to drinking water and toilets, and awareness about menstrual health have lifted a tribal pocket in Gujarat

Water was once so scarce for the residents of Kheriya, a tribal village in eastern Gujarat’s Dahod district, they had to make do with the muddy liquid that emerged after digging deep into the ground. The closest source of water was a nearby valley, where the groundwater was fed by an upland pond used for bathing and washing cattle and clothes. Kheriya was suffering more than just a water shortage — this was an existential crisis.

With little thought given to purifying or boiling whatever water could be secured by whichever means available, the health worries and everyday drudgery Kheriya — particularly its women — had to live with were constant. The desperation in the village over water was getting worse by the day when a solution that would previously have been considered improbable arrived at the doorstep of Kheriya’s grateful denizens.

Beginning in 2014, Kheriya became one of 11 villages in Dahod’s Limkheda subdistrict to get tap-water connections. A large percentage of homes in the village now get tap water and there is no overstating the value of this for the people here. The catalyst in Kheriya’s transformation has been a water, sanitation and hygiene (WaSH) programme funded by the Tata Trusts through the Tata Water Mission.

“Earlier we had to dig for water and we would filter this with a cloth before drinking it,” says Champaben Bamniya, a farmer in Kheriya. “Now we have regular tap-water supply and the quality is good. I have more time for everything now.”

The water initiative in Dahod was steered by Collectives for Integrated Livelihood Initiatives (CInI), an associate organisation of the Trusts. The ‘tribal area development programme’ (TADP), as it was called, resulted in drinking water schemes being implemented in 114 hamlets across the targeted villages. Between 2014 and 2019, TADP provided drinking-water access to more than 6,000 households while increasing tap-water coverage in the project area from 9% to 83%.

There was more to TADP than water. Around 80 projects within the wider initiative use solar energy to pump water; support was offered for the construction of 10,500-plus toilets; 96 hamlets achieved open defecation-free status; and a menstrual hygiene management (MHM) effort reached more than 5,600 women, girls and boys.

In addition, the WaSH intervention fed into CInI’s Lakhpati Kisan endeavour, a livelihood programme aimed to boost the incomes of rural communities. Water was, and remains, vital in the context. “Water security is a key enabler in creating livelihoods,” says Amit Wajpe, a coordinator at CInI. “Moreover, by providing safe drinking water and better sanitation and hygiene, TADP improved the quality of people’s lives by cutting down on health-related expenses.”

Dahod came under the Tata Water Mission lens because of its specific needs. The rocky terrain of the district does not support deep aquifers and there’s high water runoff during monsoons. Before the programme began, most villages in the region relied on community handpumps. When these didn’t work, women had to trudge long distances to fetch water from streams or ponds.

“The water shortage affected people’s personal hygiene and sanitation practices and water-borne and skin diseases were common,” says Mr Wajpe. The rainy season wasn’t all that much a relief, either, with the rainwater runoff resulting in dirty water contaminating water sources. “Many people used to suffer from cholera,” recalls Saburbhai Roz, a local village council head and president of the village’s water and sanitation committee.

TADP was launched in Dahod as an integrated, hamlet-level water, sanitation and hygiene intervention. This was done in partnership with the Gujarat government’s Water and Sanitation Management Organisation (WASMO), an agency with long years of experience in community-managed water schemes. CInI was an able and willing collaborator in the effort. “CInI’s strong village-level contacts across Dahod helped us gain the trust and participation of end users,” says Dhiraj Modhiya, WASMO’s unit manager at Dahod.

Dahod’s hilly topography and scattered tribal hamlets made laying water pipelines a tough task. Beyond that, keeping the water flowing called for a holistic approach, which meant planning and structuring for sustainability.

Under the scheme, water is drawn from borewells or open wells and supplied to communities via household tap connections. At the heart of it is the village water and sanitation committee (VWSC), or ‘pani samiti’, as it is known. Across Limkheda, these VWSCs oversee every aspect of the project, from design and construction to maintenance and collection of monthly water tariffs —

While the technical management and hardware funding for the scheme came from WASMO, the CInI team mobilised the communities involved, formed and strengthened VWSCs, prepared project reports and ensured overall quality in implementation. The team helped VWSCs develop and execute plans for 114 hamlet-level water projects.

There were problems, seen and unseen, along the way. When electricity supply proved unreliable, CInI installed solar-powered pumps to ensure uninterrupted water supply. Chlorine purification systems were installed to tackle water contamination. Internal community rivalries that could cause delays were deftly handled. “We had to ensure that the water projects were stable and sustainable,” says Mr Wajpe. “If we failed, the community wouldn’t have paid the water tariffs and the programme would have faltered.”

The TADP initiative also paid pointed attention to sanitation and MHM. The sanitation component, which included building toilets — and encouraging people to use them — was implemented by CInI in partnership with the state government under the Swachh Bharat Mission (SBM).

12,000 per household for toilet construction. CInI got a prototype toilet designed to fit within this budget. Gradually, Dahod saw plenty of toilets being built. While CInI directly facilitated construction of some 4,600 toilets by the community, another 6,000 toilets were built by the district SBM unit with the organisation’s support. 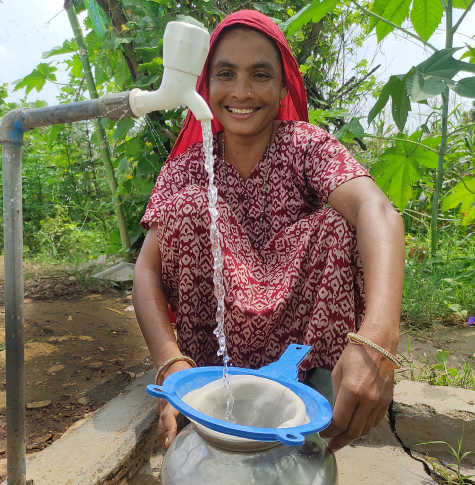 Sangitaben Bhuriya used to walk several kilometres every day to fetch water from an adjoining village. The daily drudgery and the time consumed were cause for heated arguments at home. “The menfolk in our village refused to help us fetch water. It was seen as a woman’s job,” says this resident of Chilakota, a village in Gujarat’s Dahod district.

Ms Bhuriya saw a change for the better after her village came under the ‘tribal area development programme’ of the Tata Trusts in 2014. Chilakota got its own hamlet-based drinking water system, but there was a hiccup. Since it depended on the state’s agricultural power grid, the village’s water supply was as erratic and unreliable as the electricity needed to run it.

“Every other week the power supply timings would be switched from daytime to nighttime and this affected us,” says Ms Bhuriya. Furthermore, voltage fluctuations caused mechanical breakdowns of the water-pumping machinery and that added to the financial burden of the community.

The issue was resolved after the programme replaced the electric pump with a solar pump funded by the Trusts. Harnessing solar technology eliminated reliance on the agriculture power grid and made life much easier for Chilakota’s residents. “Now we have water supply every day, in the morning and evening,” says Ms Bhuriya.

The solar-based water system has since become a staple for locals and an exemplar for other villages in Dahod.

Since 2019, TADP has stepped into a new phase with CInI partnering the government’s Jal Jeevan Mission (JJM) as an implementation support agency. The team is now using the learning from TADP to extend the Mission’s impact to around 500 hamlets in 47 villages across Dahod.In

its new role CInI will focus on capacity-building of the VWSCs in the 47 villages. Within this area, the team aims to connect around 22,000 households to drinking water schemes and cover 15,000 people through its MHM initiatives. That should ensure that the legacy of TADP, which has run its course, will continue to shine bright in rural Dahod.