The burning of crop residue, a hot-button issue in Punjab for decades, is giving way to environment-friendly alternatives

Every year when the rabi (winter crop) season drew close on the farming calendar, clouds of smoke would rise from the fields outside Daburji village in Punjab’s Tarn Taran district. Burning was the way local farmers used to get rid of straw left over from the paddy harvest of the earlier kharif (monsoon crop) season. Most considered the fire and smoke a routine part of the cycle of sowing, unaware of — or unwilling to acknowledge — just how much this contributed to air pollution.

Rajinder Singh Dhillon has changed his views on the practice of crop burning. For the last three years this farmer from Daburji has used a Happy Seeder machine to plough back the paddy crop residue into the soil, an efficient and eco-friendly alternative to crop burning. “Happy Seeder uses less fuel, helps reduce weeds and also minimises heat stress in the wheat crop,” says Mr Dhillon, who rents the machine from his village cooperative society. “It saves me time and money.” 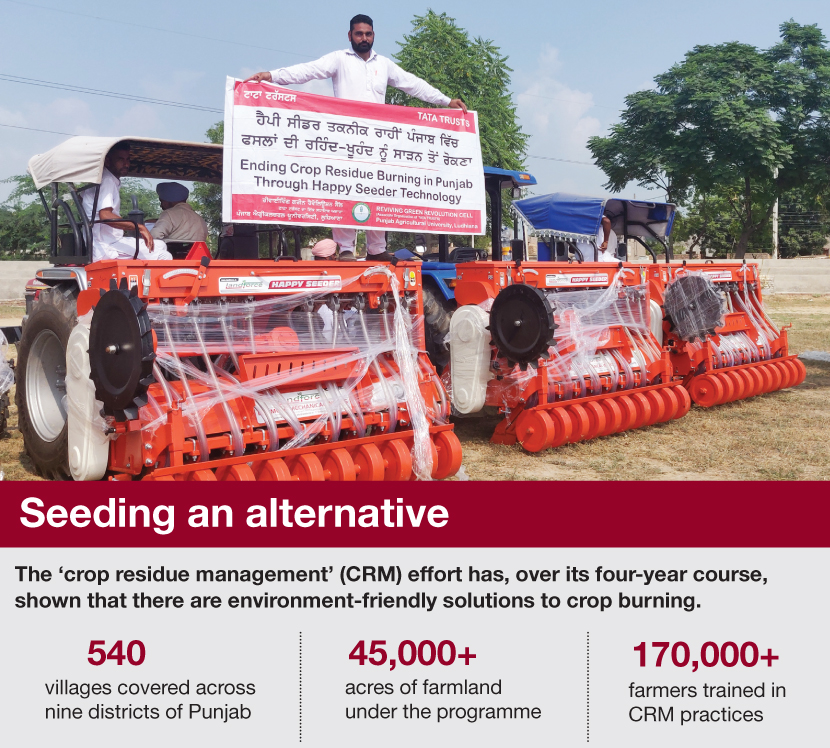 India needs more farmers to think like Mr Dhillon and the reason is in the air. When winter comes, large parts of north India experience a lethal spike in air pollution. There is a jump in respiratory disorders and visibility drops drastically. A big factor is the estimated 23 million tonnes of crop residue burned each year in Punjab, Haryana and Uttar Pradesh.

Efforts to control this health hazard have been haphazard, but some solutions have worked. In August 2018, the Tata Trusts, through their Ludhiana-based associate organisation Reviving Green Revolution Cell (RGR), stepped in to help with a ‘crop residue management’ (CRM) programme that has shown promising results.

Happy Seeder, developed by Punjab Agricultural University (PAU) — with the Tata Trusts among the initial funders who supported its development and refinement — is an important part of the initiative. Ploughing crop residue into the soil instead of burning it improves soil structure, adds nutrients and reduces the overall water requirement.

"With continuous use of this practice, farmers can save on nitrogen fertilisers as well as weedicides,” says Baljinder Singh Saini, executive director at RGR, which operates from within PAU. Leaving crop residue onsite is far better and also more economical. “They can save

CRM has, crucially, helped bring farmers on board. Around 540 villages, comprising 45,000-plus acres of farmland, have been ‘adopted’ for interventions in nine districts of Punjab and more than 170,000 farmers have been trained in CRM practices.

The bigger expectation is that air pollution can be reduced on a permanent basis by scaling up proven technologies and encouraging farmers to use sustainable agricultural practices. “With the support and collaboration of governments, research institutions, farmer organisations, policymakers and other stakeholders, we hope to see a substantial decrease in crop-residue burning in the project area by 2024,” says Mr Saini.

That would go far in tackling a peril that is damaging on more counts than one. The burning of crop residue is widely known as a terrible environmental hazard. It’s also bad for crops and soil health, given that burning standing husks and stalks is a waste of precious nutrients that could enrich the soil.

“Burning rice straw is such a waste,” says Mahesh Narang, who heads PAU’s farm machinery and power engineering department. “That’s because rice straw contains many nutrients that are returned to the soil if left to decompose in the field. CRM machines like Happy Seeder help sequester carbon and restore soil health.” 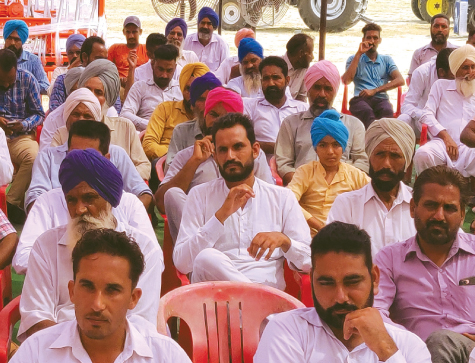 Subsidies to the rescue

Investing in the ‘crop residue management’ (CRM) machines requires substantial upfront capital, something most Indian farmers do not readily have. Although farmer cooperatives play an important role here, what’s really helped are government subsidies. Within Punjab, CRM equipment such as Happy Seeders, paddy-straw choppers and the straw management system are offered with 50-80% subsidies, and this is a more-than-useful benefit.

The Tata Trusts engages with farmers to offer information and advice about the equipment as well as how to fund them. Says Baljinder Singh Saini, executive director at the Tata Trusts’ RGR Cell, “Our team also works with farmers to facilitate the getting of subsidies and for capacity building on the use of the machinery.”

That’s not all. Within the CRM project area, RGR works to support small farmers by bringing them up-to-date on the range of government schemes available. For instance, the Rashtriya Krishi Vikas Yojana offers up to 85% subsidy depending on the project. The National Food Security Mission focuses on aid for improving machinery.

There’s also the Sub-Mission on Agricultural Mechanization, a scheme that assists small and marginal farmers by creating hubs that aid in the purchase of equipment. Additionally, loans are available from the central government’s NABARD (National Bank for Agriculture and Rural Development) to subsidise the buying of tractors.

In August 2022, the Punjab government launched a portal where farmers can apply online for subsidies. The idea is to make the process simpler for farmers applying for farm-equipment subsidies.

Exploring alternatives to crop burning led PAU to devise, along with Happy Seeders, the ‘super straw management’ system. This contains equipment attached to the combine harvesters and it cuts the stalks of harvested paddy and spreads the loose straw on the field to act as mulch and preserve soil moisture. Happy Seeder sows wheat in the field by going through the loose straw and standing stubble.

Much of the Trusts’ endeavour has been about pushing farmers to follow the best crop-residue practices. The project area was divided into clusters of 15 villages. In each cluster, five villages came under direct implementation by the Trusts and 10 were covered through community mobilisation for mass awareness.

Farmers were given demos and hands-on training and the Trusts have supported them and village cooperatives in renting the required machines or buying them at a subsidised cost. Gurbhej Singh from Bakkipur village in Tarn Taran is a farmer with his own Happy Seeder machine (he rents it out to other farmers as well).

“No-burn agriculture is good,” he says, adding that the CRM effort has not just improved the quantity of produce but also its quality. “Perhaps it’s because we use fewer chemical fertilisers now.”

Balwinder Singh, a farmer from Makowal village in Amritsar district, is another staunch supporter of CRM. “My crop grows normally and I barely have to add any manure since the straw provides adequate mulch,” he says. With seasonal yield increasing from 16 to 20 quintals, Mr Singh’s income has increased and he’s pleased to have his soil in better health. “I see plenty of earthworms there now.”

RGR’s consistent and tenacious efforts have been integral to the programme’s well-being. The CRM component is monitored by kheti doots (farm coordinators), who get the farmers ‘ready’ to adopt its methods. To create mass awareness among the farmers not directly reachable, the team designed digital posters and other content that was shared with the farmers through WhatsApp.

Positives aside, there is much distance left to cover. “Efficiency can be enhanced and we need to train technical operators and drivers in how to handle the CRM equipment,” says Mr Saini. The team also wants to explore how Happy Seeder can be employed for direct seeding of rice and other crops.

Mr Narang feels that sustainable change can only happen when policy support is extended to enforce no-burning agriculture. “Now that machines are available, there’s no excuse to burn crop residue,” he says. Kudrat Singh, a farmer from Athwal village in Amritsar, sums it up best: “Giving back to mother earth is the best reward. She will reward us in return.” 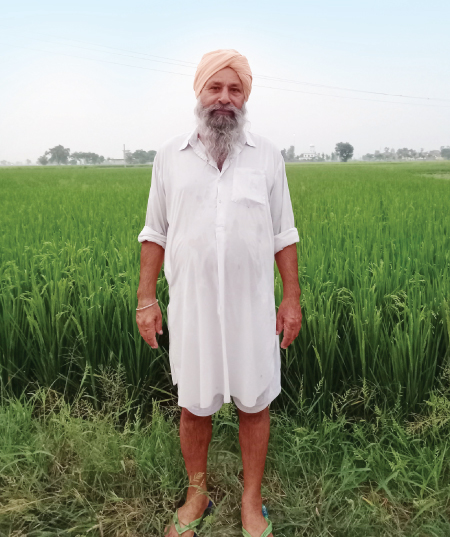 Using Happy Seeder has helped Gurbhej Singh, a farmer from Bakkipur village in Amritsar district, improve the quality of his field and his crop