A breakthrough variant of the onion crop has revitalised farming for more than 3,750 households in Uttarakhand

With the onset of the rabi (winter sowing) season, Mahendra Singh, a farmer fromUttarakhand’s Nainital district, has got busy sowing onions on his farm. A native of Kotabagh village, Mr Singh is much relieved to be full-time in agriculture again, given that only a while back he had quit farming and been forced to migrate to the plains for factory work.

Mr Singh’s woes of the recent past stemmed from drawbacks farmers in the region are all too familiar with: climate change, market volatility and plain ignorance. “Erratic rainfall often destroyed our wheat crop and sometimes we were not even able to produce enough seeds for cultivation the following year,” he explains. “Also, we farmers did not have the required knowledge about crop management techniques, pest and disease control and fertiliser application.”

Business with a gender bias >>

In rural Uttarakhand, low climate resilience and antiquated farming methods have created a perfect storm for the decline of farming, leading to rural poverty and outward migration. In recent decades, many parts of the hill state have seen drastic climatic shifts marked by unpredictable rains, receding glaciers and the drying up of streams. These have hit farm yields, especially for traditional crops like wheat and paddy. Consequently, many locals were compelled to leave their farms in search of work elsewhere.

These farmers are now back doing what they know best, riding on the fillip provided by an agriculture programme supported by the Tata Trusts, the Hans Foundation (now Rural India Support Trust) and Axis Bank Foundation. Supported and implemented by the Himmotthan Society, an associate organisation of the Trusts, the programme has enabled more than 3,750 households from 198 villages in five districts of Uttarakhand to make a fair fist of farming.

Onion seeds and bulbs, of a different kind, are central to the programme. They make for a more profitable agricultural venture and the evidence is in the rise of farmer incomes — up to 300% — for households that have taken up the business. “The project has improved the lives of vulnerable farming communities, helping them increase incomes through better productivity and seed and bulb cultivation,” says Rajendra Koshyari, area manager (agriculture) at the Trusts. “And it has strengthened community-based institutions.” 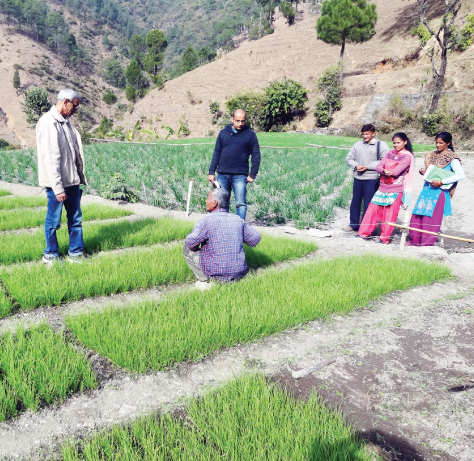 Himmotthan’s goal is to build prosperous, self-sustained mountain communities and the agriculture initiative fits right in with that end. The project team realised that growing wheat, the traditional rabi crop in the region, was fraught with risk since local wheat varieties were plagued by pests and disease. There were two endemic challenges, besides: the depletion of community-based seed banks and the lack of scientific farming technologies.

Way of the seed

It was in 2014 that Himmotthan planned, in partnership with the Vivekananda Parvatiya Krishi Anusandhan Sansthan (VPKAS), the seed-based intervention. The objective was to offer farmers from hilly regions access to hardy, climate-resilient seeds. “Since onion is high in value and consumption, it was our first choice,” says Mr Koshyari.

The ace up the team’s sleeve was the ‘VLP-3’ variety of onion seed, developed by VPKAS in 1991. VLP-3 is more suitable for hilly areas, is more immune to diseases and the harvested onions have a longer shelf life. Strangely enough, VLP-3 never left the lab until it caught Himmotthan’s attention.

To convince farmers and ensure faster and smoother adoption, Himmotthan decided to fund the initial supply of these seeds. But local farmers were still apprehensive about cultivating the new seeds, and understandably so. “They were concerned about the price the new variety would fetch in the market,” says Yashpal Singh Bisht, regional manager with the Trusts. “Our team addressed this and every other query they had.”

Santosh Goswami, a farmer from Chaukhutiya village in Almora district, was an early adopter. She sowed the high-yielding variety of onion seeds on a small piece of land in 2016. Earning a good price for the new variety of produce in the very first season boosted her confidence, and she went on to increase the area under onion cultivation. “I never thought onion could be grown here,” she says. “Himmotthan has changed that.”

Beyond seeds, the project team has trained the farming community on modern production techniques, the right methods of sowing and transplantation, manure and fertiliser application, storage and, not least, proper solutions for pest and insect attacks.

Among those who have benefitted from the modernisation in method and thinking is 53-year-old Geeta Devi, who hails from Kotabag in Nainital district. “Our farm yield has doubled to 12kg per nali [a local land measure that works out to about 200 square metres]. Our quality of life is so much better. My family members no longer feel the need to migrate for livelihood reasons.”

Other farmers from across the project interventions areas have similar stories to tell. Average farm income in the project area has risen to

2,000-3,000. Seed-to-bulb production is higher than the state average and this translates into an additional income of more than 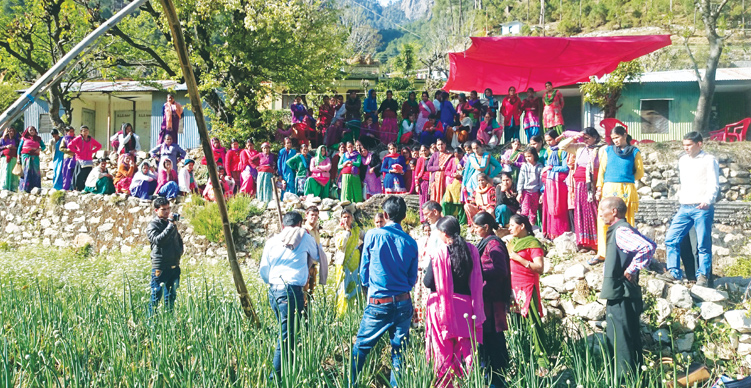 Business with a gender bias

The story of the Bandal Ghati Self-Reliant Cooperative (BGSRC) is embedded within the larger onion farming narrative. As demand for the VLP-3 variety grew, implementors Himmotthan Society realised that there was an additional market opening in the ‘mission pulses’ project and in maximising the mountain agriculture effort.

To meet demand and also create a livelihood opportunity, it started a seed-production programme in 2018-19. The programme was institutionalised and commercialised through the formation of BGSRC, in Maldevta in Dehradun.

At the initial stage, Himmotthan made the seeds available to BGSRC. The rest is up to the cooperative, which manages the processing, packaging and marketing of the seeds. BGSRC also directly sources the latest breeder and foundation seeds at intervals of three to four years.

What makes the cooperative different is that it is run by an all-women team of nine board members. “This team manages the cooperative, with technical support from Himmotthan,” says Jagdish Chandra Joshi, a programme officer with Himmotthan who oversees the seed initiative.

BGSRC is well-equipped for seed production, with a lab for testing, processing, packaging and tagging, and decentralised, cluster-level storage facilities. Its client list now boasts the Uttarakhand government, farmer-producer organisations, NGOs and individual farmers. Today, this women-led cooperative is an exclusive source of onion seeds in Uttarakhand.

The onion farming is implemented in two stages. In the first, farmers cultivate onion bulbs, the majority of which are sold commercially. In the second stage, a portion of these bulbs — those meeting desired size specifications — are used to cultivate onion seeds. The programme has introduced onion production in eight village clusters of Uttarakhand, while seed cultivation is concentrated in four clusters.

The programme has enabled farmers to develop climate resilience and become successful mini-entrepreneurs as well. For instance, Heera Devi and Sher Singh, residents of Sainj village in Bageshwar, reduced their acreage under wheat to increase onion and onion-seed farming, resulting in their profits rising to more than

Onion bulbs being sowed in Kholsir in Bageshwar

Radha Devi, a 32-year-old from Kotabag in Nainital has seen her annual income from onions rise by

36,000. From living hand-to-mouth, she and her family are now able to set aside money to develop their farm. “I am able to meet my needs and also save for the future,” she says.

The success of the onion variety experiment has had a ripple effect. Since 2018, Himmotthan has expanded the programme to include new variants of finger millet, barnyard millet, amaranthus (millet), kidney bean, rye, garlic and coriander under the ‘mission pulses’ project funded by the Trusts. Cabbage, potatoes and peas are at a trial stage.

With onions, where it all started, the Tata Trusts are planning to expand the adoption of climate-resilient variants of the crop beyond Uttarakhand. Trial runs for these seeds is underway in Uttar Pradesh, Arunachal Pradesh, Assam, Meghalaya, Ladakh and Himachal Pradesh, the expectation being that replicating the effort will bring comparable success.