A class being conducted on how to deal with choking

Ilearned about emergency care at medical school, of course, but this was an eye-opener,” says Shamsuddin PA. A senior resident doctor at the Government Medical College, Thiruvananthapuram (TMC), Dr Shamsuddin is referring to a path-breaking training programme he attended three months back, and the life-saving knowledge it has equipped him with.

The place where Dr Shamsuddin got to re-hone his skills, the Apex Trauma and Emergency Learning Centre (ATELC), is designed to deliver a service for the public good that is at once critical and immediate.

Established by the Kerala government with support from the Tata Trusts, the Centre is focused on imparting an education in emergency treatment to professionals in the state’s healthcare ecosystem — from doctors and nurses to medical students and a range of first responders — tasked with attending to patients requiring instant attention.

That means anyone brought to a casualty ward: cardiac patients, victims of road accidents and cases of poisoning, near-drownings, burns and snakebites. ATELC’s three-day training incorporates the latest protocols and practices in emergency and trauma management, effective and appropriate use of medicines, and uniformity and dependability of care. The end goal is less complicated — to maximise the safety and survivability of patients in life-and-death situations and to minimise mortality and disability.

“We get to know about systematic approaches and teamwork in crisis situations,” adds Dr Shamsuddin. “Aside from road accidents, this is especially useful with cardiac cases. I found the training more than useful when, for example, I had to attend to a stab wound victim whose blood pressure had dropped drastically.”

For Ashwin Ramachandran, another senior resident doctor at TMC who has completed the ATELC course, it’s the organised response to emergency care that has stayed in mind. “Much of the course is concentrated on the basic and the simple, but this is stuff you are likely to miss in the crisis moments of emergencies,” he says. “There is a stepwise and structured method you have to adopt, from assessment to treatment, in particular circumstances.” 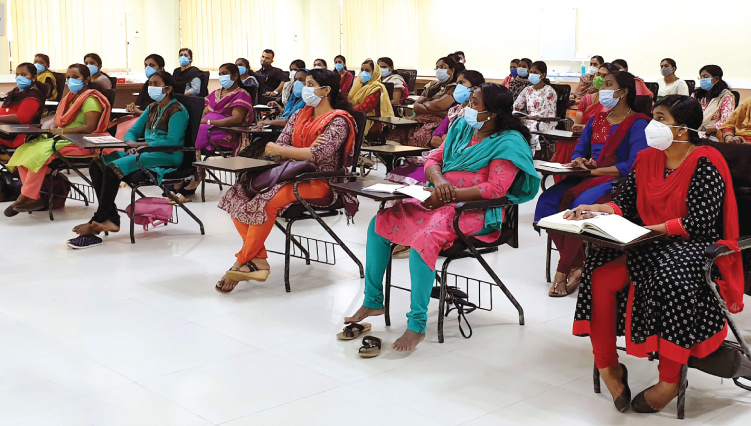 An orientation course underway in an ATELC classroom

None of this was new for emergency-care specialist Nidhi Mohan, also a senior resident doctor at TMC. “I’m familiar with the conventions of emergency care but that’s not how it is for people from other medical streams. They truly appreciate what the course offers and the insights it provides. They get to broaden their horizons and share their experiences.”

Dr Mohan emphasises a facet of the ATELC training that is not so obvious. “Teamwork is vital in emergency care — it can never be a one-man show — and the course reinforces the point,” she says. “I feel as many people as possible should receive the ATELC training, not just doctors, nurses and paramedical staff. We are, obviously, not as advanced in emergency care as developed countries but we can get there if the reach of the programme is expanded to include ordinary citizens. Having said that, this is a fine beginning.”

Dr Ramachandran is just as enthusiastic a votary for extending ATELC’s spread. “I believe the training and awareness of its contents should be made available to the general public, given that first responders in emergencies are rarely doctors or nurses,” he says. “This can surely be done because Kerala has a literate populace and laypeople are the ones who inevitably have to be depended on during that ‘golden hour’ when victims need basic life support before they get to a medical facility.”

Widening ATELC’s scope has been on the cards from the time the concept started getting crystalised. The emergency care idea itself had its genesis in a visit made by a health delegation from Kerala to University Hospitals Coventry and Warwickshire (UHCW) in Britain in October 2017. Led by then Kerala health minister KK Shailaja, the team was especially impressed by the critical care training there and the intent to replicate this back home got seeded.

The delegation was introduced to the late Sushanta Kumar Bhattacharyya, the Indian-origin engineer and educator who founded the Warwick Manufacturing Group. Lord Bhattacharyya — he became a member of the House of Lords in 2004 — hosted a dinner for Ms Shailaja and her team and, during the freewheeling discussions that ensued, the subject of replicating UHCW’s emergency care training in Kerala came up.

Having the state government do this on its own would have been a long-drawn-out process. Getting the project up and running quickly necessarily meant securing assistance from outside the system. Lord Bhattacharyya promised to help and he did that in spades, taking the idea to Tata Trusts Chairman Ratan Tata, an old and dear friend. A crucial go-between in all of this was Vinod Menon, a TMC alumnus and a doctor with UHCW.

Mr Tata committed to support the effort and the Trusts came on board in 2018, pledging financial backing for the training module. The Hyderabad-based Care Institute of Health Sciences, domain experts in emergency care, was roped in to implement the project and UHCW became the knowledge partner, with the Kerala government providing the infrastructure and allied support.

The Covid pandemic delayed the initiative but that forced impediment was overcome and ATELC got launched in February 2021. The Centre hit the ground running and its progress since then can be measured by the number of doctors, nurses, medical students and paramedical staff — nearly 13,000 professionals and counting — who have been trained at its well-appointed 25,000-square feet facility at Thiruvananthapuram General Hospital.

The ambience of the Centre complements its all-round quality and the equipment employed to aid the learning methodology. This includes mannequins that cost around

5 million a unit, simulations labs and elegant classrooms. No expense has been spared to make ATELC a standout institution in looks and substance and those who pass through its portals are not hesitant to vouch for it.

“ATELC is a state-of-the-art project and we have had a wonderful start that has been enabled by the Tata Trusts,” says Vishwanathan KV, who heads the department of emergency medicine at TMC and is the nodal officer for trauma care in Kerala. “Our plan is to make this the apex centre, ready the course, develop ancillary centres and create more such facilities. We will achieve that in the next couple of years.”

With the Trusts having handed over the running of the Centre in July 2022, the onus is on the Kerala government to cement the gains made and enlarge the canvas of operations. The state’s Department of Medical Education is now in charge of ATELC and it has big plans to do exactly that. “Our first priority was the government machinery but we will certainly expand the ambit from here on,” adds Dr Vishwanathan. “We need to evolve a system for that, generate revenue, ensure functional autonomy and hire regular staff to run the institute. We are working on it.” 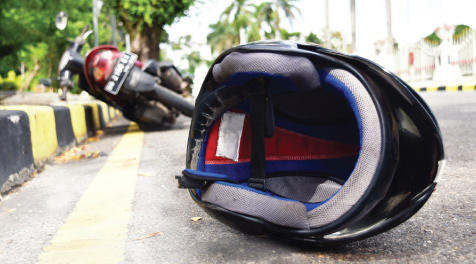 Kerala has a proportionately higher accident rate than any other state in India, save Goa

It’s a public health crisis hiding in plain sight and Kerala has been struggling to contain it. Road accidents are rampant here and it seems not enough is being done to stem the deadly tide. The state ranked fifth across India in 2021 for the number of road accidents recorded (33,2960) and 17th in fatalities (3,429). More alarmingly still, Kerala takes second spot — behind Goa — in the list for most accidents per 100,000 of the population.

The causes fuelling the grim statistics are not hard to pinpoint: poor road infrastructure and design, inadequate pathways for pedestrians and cyclists, driving while intoxicated, distracted driving, recklessness at the wheel, scant respect for rules, and deficiencies in enforcing traffic regulations. These causes apply to India as a whole, for sure, which explains why the country tops the world, ahead of China and Indonesia, in road accidents and casualties (412,432 and 153,972, respectively, in 2021).

The emergency-care training that the Apex Trauma and Emergency Learning Centre (ATELC) provides is crucial in the context. Road accident victims constitute, alongside cardiac patients, the largest category of those needing critical care and basic life support. Immediate attention is not the only priority in such circumstances; survivors in accidents have to be handled in a safe manner and the responsibility for this rests with first responders, who typically are laypeople.

“Bundling an accident victim into the nearest available vehicle is a strict no-no,” says Padmakumar Pillai, associate professor at the Wayanad Government Medical College and a trainer with the ATELC programme. “You should use a spinal board, ideally, but in its absence you have to ensure that the victim is laid out flat. Or you risk worsening what could be a spinal injury. That’s the reason why the general public, and not just doctors, nurses and paramedical staff, should be made aware of emergency-care procedures, CPR [cardiopulmonary resuscitation] and the like.”

The potential to spread the ATELC net is huge. The way it is envisaged, the Centre’s training module will eventually cover the private healthcare system, police and fire personnel, home guards, ambulance drivers and attendants. “In the initial part of the initiative we never thought of the first responder in a medical emergency,” says KJ Devasia, a retired colonel who headed the project and continues to be associated with it. “But the way things are panning out the thought is that the layperson, in fact every citizen of the state, could be a first responder.”

There is no overstating the value of a life-saving force such as this. “In medical emergencies you need to have proper systems of care where you respond promptly,” explains Sreeram Sistla, a senior consultant (health) with the Trusts who was closely connected with the ATELC initiative. “There’s not a moment to lose. You have to stabilise the patient and make sure he or she is reached, in the quickest possible time, to the right kind of emergency care facility.”

There is no doubt, adds Dr Sistla, that ATELC can be replicated elsewhere in India, though he does not recommend a copy-and-paste job. “We at the Trusts wanted to develop an emergency-care model that could become a proof of concept. My hope is that this will be put to work in places with a large number of medical emergencies, like Goa, for instance. We would love to work in states that are passionate about this.” 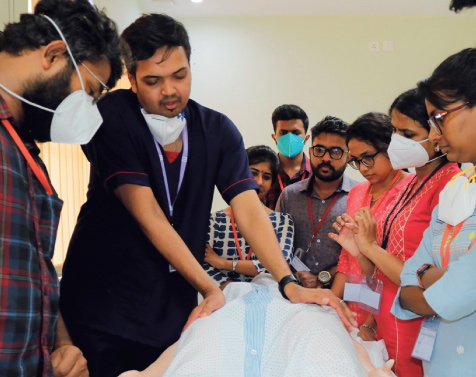 And passion is what the Kerala government has brought to the ATELC project. “They were deeply involved and they took ownership of it,” says HSD Srinivas, director, health, with the Trusts. “The Centre coming up in the manner it has is evidence of their commitment to emergency care in the state.”