Think of Ladakh and the images that come to mind are of apricot orchards, sky-blue lakes and streams gushing through rocky passes. Picture perfect these may be, but concealed beneath the beauty is a stark and barren reality — Ladakh is, fundamentally, a cold desert with average rainfall as low as 10cm a year.

Farming in such a region would be impossible were it not for the springs and streams of glacier meltwater that sustain Ladakh’s population. Unfortunately, climate change is manifesting itself here too, affecting what used to be a settled way of life as ‘glacier retreat’ — a phenomenon caused by rising temperatures and decreasing snowfall — threatens lives and livelihood.

The fallout is a mounting scarcity of water during Ladakh’s summers, and at the receiving end of it are farmers such as Padma Sangdup, who hails from Sakti, a village of about 370 households in Leh district. “The flow of water in our village’s irrigation canal would fall between April and July because meltwater from the glaciers was insufficient,” says Mr Sangdup. “We had to fetch water from a subsidiary canal 2km away.”

Things have got better for Mr Sangdup and Sakti ever since an artificial glacier was built to help the village community get a measure of water security. Supported by the Himmotthan Society, an associate organisation of the Tata Trusts, the artificial glaciers initiative involves the construction of glaciers over nearby streams.

These glaciers are, essentially, a series of stone-walled pools that freeze in winter — they resemble icy rivers then — before beginning to melt around April, in time for the barley- and vegetable-sowing season. The water released through the process is distributed to farmers through a traditional turn-based system called chures. 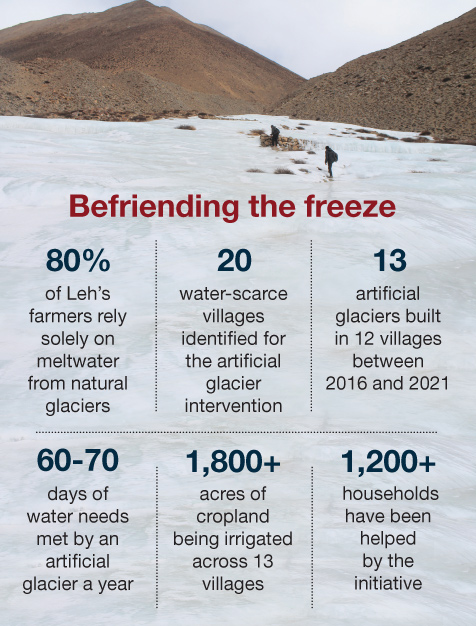 “With the extra supply, households get their share of irrigation water once every 10 days, where earlier it was 15-20 days,” says Mr Sangdup. The increase in water availability has prompted many of Sakti’s villagers to grow alfalfa (as cattle fodder) and vegetables. “I farm water-intensive crops like green peas, which I couldn’t earlier,” adds Mr Sangdup.

The idea of artificial glaciers was conceived in the 1980s by Chewang Norphel, a now-retired Ladakhi engineer. In 2016, the Tata Trusts’ Ladakh Livelihood Initiative engaged Mr Norphel and employed his expertise, and method, to good effect. Himmotthan identified 35 of Leh’s 113 villages as highly water-stressed and found that 20 of them had scope for artificial glaciers.

Over time, 13 artificial glaciers have been built by local communities with Himmotthan’s help. Water from the glaciers today irrigate more than 1,800 acres of cropland across Leh, serving the farming needs of some 1,200 households while providing water for 60-70 days every year (in the 120-day crop cycle).

Artificial glaciers could be a sustainable solution, on a wider scale, for the problems of water scarcity fuelled by climate change, present as clear a danger in India’s higher reaches as it is along the country’s coastline. The glaciers of the Hindu Kush mountains, which feed a number of rivers in India, are retreating at a mean rate of about 14.9 metres per annum. That implies that glacier meltwater will continue to decrease.

Ladakh has been feeling the water-shortage pinch for decades. “Conflicts over water have become common within and between villages in Ladakh. There have also been instances of entire villages relocating due to water shortages,” says Samten Choephel, area manager (Ladakh) at Himmotthan. “Artificial glaciers can never replace natural glaciers, but they can be a robust supplementary source of water for farming communities.”

For Himmotthan and Mr Norphel, setting up the glaciers in Leh, the larger of Ladakh’s two districts, was a matter of priority. While around 20% of Leh’s inhabitants have access to water from the Indus river, the rest rely entirely on streams and springs coming from glaciers at altitudes of 6,000 metres or more.

Mr Norphel’s ingenious system banks on storing the ‘winter water’ in these streams and springs — which may otherwise run off — for use in summers. Embankments are built within perennial streams close to human habitations to impede the water’s flow and form pools that freeze in late November to form an ice river. Unlike higher-altitude natural glaciers that melt from June onwards, artificial glaciers are lower down the slopes and, hence, able to deliver meltwater at the start of the sowing season. 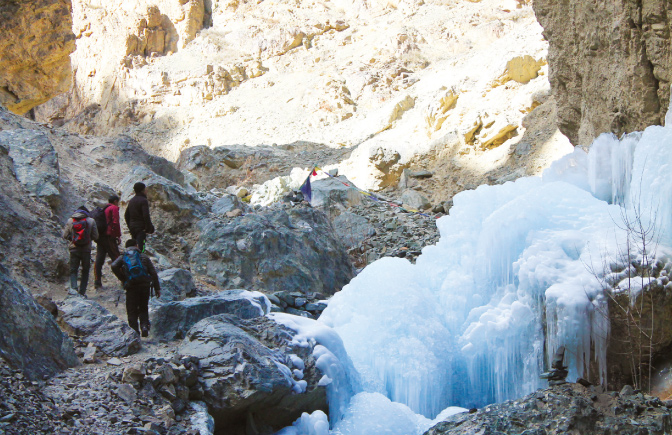 Himmotthan has tried to enhance the durability of the artificial glaciers project by roping in village communities for collective ownership and responsibility. The process begins with the Himmotthan team visiting a village and meeting locals to explain the benefits of building an artificial glacier within walking distance.

Once the residents are convinced, a village watershed committee (VWC) is formed. VWCs are integral to all that happens from here on: selecting the glacier site, conducting feasibility studies, collecting construction material and building the embankments. Himmotthan provides technical guidance and reimburses locals for the labour they put in.

Each glacier is designed to meet local conditions. If the stream is wide enough, the residents build embankments and gabions (wire mesh filled with stones) across it to partly block the flow of water and trap it. An alternative approach is to divert stream water into shaded areas of less sunlight to facilitate quicker freezing.

The construction jobs are uncomplicated: specialised machines for excavation, hard to get in isolated areas, are not needed, and the stone used in the gabions is freely available on Ladakh’s rocky hillsides. “The ingenuity of Mr Norphel’s design is its simplicity, cost-effectiveness and ease of maintenance,” explains Mr Choephel.

This is a high-impact design. With each embankment able to store up to 2 million litres of water, the artificial glacier’s storage capacity can be as high as 50 million litres, depending on temperature, topography and the velocity of the stream water.

The challenge with the project lies not in construction as much as in maintaining the artificial glaciers. The swell in tourist inflows and the availability of government jobs in Ladakh has meant that many villagers are moving away from farming. The result is that in some areas watershed committees often lack the people to monitor the glacier or undertake the civil repair work needed to keep embankments in fine fettle.

In places where the project is running smoothly, artificial glaciers have proved providential for water-stressed villages. Take Hundri, a small settlement in Leh’s Nubra spread. Hundri built an artificial glacier in early 2021 and the benefits for its villagers have been substantial. “Between 30-40% of the water shortage we used to face has been eliminated,” says Tashi Puntsog, the goba (village head) of Hundri.

The effectiveness of the artificial glaciers is clearest in the remoter corners of Leh. Says Sherab Angdu, the goba of Mudh village, which is 188km from Leh city: “Earlier it was a struggle to even get enough water to drink during the summer months. We could only release water for an hour or two a day. Now, thanks to our artificial glacier, there is no water shortage.”

For Himmotthan, each glacier represents a small victory in its quest to build climate resilience among Ladakh’s farmers. Seven more artificial glaciers have been planned for Leh district by the organisation, but the ambition goes well beyond. “Our intention is to scale up the project to other geographies in Ladakh,” says Mr Choephel.