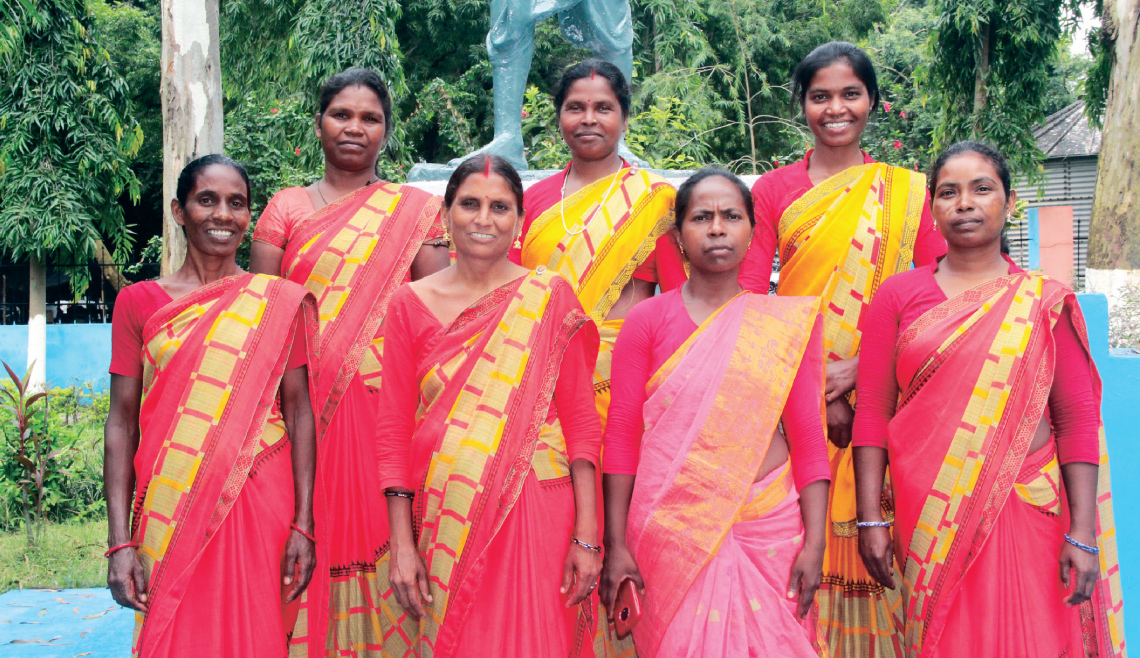 The company of women

Farmer producer companies in the Lakhpati Kisan programme are improving every aspect of life for beneficiaries, and the money they have in hand proves it

Even if the Murhu Nari Shakti Kisan Producer Company Limited (MNSKPCL) did not have the words ‘women power’ in its name, there would have been no doubt about what fuels this collective with a difference in Jharkhand’s Khunti district.

Formed in 2018 to lead the Lakhpati Kisan Smart Village programme supported by the Tata Trusts in Khunti’s Murhu subdistrict, the all-women MNSKPCL is one of eight farmer producer companies (FPCs) in Jharkhand created and nurtured by the Trusts’ partner organisation, Collectives for Integrated Livelihood Initiatives (CInI).

The numbers notched up by the eight FPCs are impressive. They have a total of 13,293 shareholders, who have contributed to a cumulative capital of

225.6 million, of which about 70% has been achieved from agriculture.

MNSKPCL itself has 3,110 shareholders — mostly small and marginal farmers — who manage a share capital of

27,32,920. It also has a dynamic board of directors who are all themselves lakhpati kisans, which means they earn a minimum (and irreversible) income of

These women are not boardroom-bound directors. One of their many responsibilities is to go from village to village, educating farmers about how they, too, can become lakhpatis by diversifying their sources of income.

Farmers in Jharkhand have for generations subsisted on paddy and millets, and they rarely had enough to sell in the market. Now they are being urged to rear livestock and grow vegetables alongside their traditional crops. “If you are open to cultivating new things, using more scientific ways of farming, better fertilisers and pesticides, your earnings will increase,” says Shanti Nag, a FPC board member from Lupungdih village in Khunti.

Says Mithila Devi of Mahil village, who is also on the MNSKPCL board: “We pass on the training we receive from CInI to farmers. It’s impossible for the trainers to visit every village, so we do that instead. Also, by training people over and over again, we have become experts ourselves.”

CInI started with 2,500 farmers in Khunti. It soon realised that its core team couldn’t cover all stakeholders and that’s when the task was handed to the FPC, which does the end-to-end work, from motivating farmers and helping them with planning, to deciding how many households would be involved in what kind of cultivation.

FPCs also help with sourcing saplings, fertilisers and other materials the farmers require. As a bulk buyer with access to a large number of farmer-shareholders, they get the best materials through a robust supply-chain network, and at reasonable prices.

With a growing number of households aspiring to become lakhpatis, greater coordination is required to make things easy and affordable for all. For instance, most saplings need to be transplanted in the field within 10 days of reaching the farmer. “If the entire village synchronised its sowing patterns, then only one truck would be enough to carry the saplings,” says Ms Nag, “and the farmers can share the transport costs.”

‘No one should have to leave their home again’

Mukta Nag and her husband lived in Delhi for many years, far away from their village of Saparum in the Khunti district of Jharkhand. “There was no work for my husband in our native place so we were forced to migrate,” says the 39-year-old Ms Nag. “I hated it there, and I often thought of coming back.”

The Nags got the chance to return in 2015, when CInI launched its Lakhpati Kisan Smart Village programme in Jharkhand. “We heard that the initiative would double our earnings by diversifying our sources of income, so we decided to try it out,” says Ms Nag. “My in-laws used to cultivate paddy and finger millet in the small family holding. But we quickly learnt that we could grow other vegetables and rear pigs, chicken and fish as well.”

Ms Nag decided to start rearing pigs and received two piglets, a male and a female, from CInI. “That changed our life,” says Ms Nag. “In the first litter, we had nine piglets; in the next there were 13 and we started making money.

“I was able to buy a bicycle to take my daughter to school. Before that I had to walk her to the school, which was a kilometre away, with my infant son strapped to my back. It was particularly difficult during the rainy season.” As her earnings grew, Ms Nag purchased a scooter. “The money for it was entirely from my tomato business.”

Financial independence has given Ms Nag confidence. “I used to attend mahila mandal [women’s committee] meetings and not utter a word,” she says. “When the CInI trainers came to speak to us, I felt I didn’t know enough to even ask questions. But now I do.”

Having found her voice — and after becoming a lakhpati kisan — Ms Nag is now on a mission to bring others on this path to a better life, especially those who have had to migrate to other states for work. “I want to make sure they never have to leave their home again.”

Similarly, if harvesting takes place at the same time, only one or two vehicles need be used to pick up the produce for the market, making the operation cheaper again for growers. FPCs like Murhu Nari Shakti facilitate the entire process, keeping an eye on costs and new technology.

One vehicle can carry 2.5 tonnes of tomatoes, a typical yield from seven-eight farms. But if a village doesn’t have enough tomato cultivators, the FPC connects them with farmers from another cluster of villages to share the expenses. The company also acts as a marketplace for farmers, buying directly from them and selling in the market.

“Earlier, we had to take our produce to the market ourselves and sit all day there till it was sold,” says Gomatri Mundu of Bari village in Khunti. “The transport costs alone were prohibitive, not to mention the losses we incurred if we couldn’t sell our perishables. And we never got a good price, either.”

The FPC’s intervention on all these fronts, from sourcing to selling, has eliminated the need for middlemen. This ensures that the farmers get the best price for their produce. “Our FPC is instrumental in bringing the demands of the farmers to the fore and making sure they are met,” says Rajmani Tiru of Gamhariya village in Khunti. “In the same way we, the directors, take the FPC’s initiatives back to the farmers.”

The company also helps farmers acquire fish fingerlings, piglets or chickens for rearing after keeping a small margin of profit. Furthermore, the direct purchase of inputs for agriculture and animal husbandry has created a number of nursery and brood entrepreneurs. “Now that we’ve been freed up from sitting for hours trying to sell our produce, we have more time to do other things,” says Ms Mundu.

“Their primary role is connecting with the community,” says Somnath Das, Coordinator, CInI. “We are now running health programmes through the FPCs. They motivate people to join the menstrual health management and cancer projects.”

Besides health issues, Ms Mithila and her fellow-directors are involved in various water and sanitation programmes in their local council. “We’ve petitioned the government to set up water tanks in the villages in our subdivision and provide tap water connections to each household,” says Ms Mithila. “We’ve ‘mapped’ the villages to understand their water requirements.”

Though not strictly within its ambit, the MNSKPCL board has taken it upon itself to speak to villagers about constructing, and using, toilets in their homes. Every board member has had a pucca (permanent) toilet in her home for the last four or five years, so she is well suited to persuade others. “As lakhpatis, proper toilets and better access to water and other amenities are things all of us must have,” says Ms Tiru.

Tomatoes have turned the tide for this village

Tomatoes have changed the fortunes of 55-year-old Dayamani Nag’s village of Bhursu in Jharkhand’s Murhu subdistrict. “Previously, we would grow tomatoes only in certain seasons, and never during the monsoons because of pests,” she says. But it’s been different since 2017, when CInI’s trainers began teaching Bhursu’s villagers how tomatoes could be cultivated all year round using the correct techniques.

“In the beginning only five farmers opted to grow tomatoes, then seven, and now it’s the entire village,” adds Ms Nag. “We learned about a package of practices, among them using soilless saplings, creating small embankments for excess water to drain away, and using appropriate fertilisers and pesticides.”

It was a challenge initially to grow anything at all in Bhursu’s barren soil. “Large tracts of land were left fallow and there wasn’t even a blade of grass for cattle to graze,” says Ms Nag. “But the soil’s fertility improved after we started cultivating tomatoes.”

The soft-spoken Ms Nag is a respected ‘elder’ in the Murhu Nari Shakti Kisan Producer Company and she’s on its board of directors. “Our primary responsibility is educating the villages about the farmer producer company [FPC] and its work,” she says.

In the early days of the lakhpati kisan programme, Ms Nag and others in her FPC would go from village to village illustrating the success they’d had from cultivating crops other than paddy.

More money in hand translates into a more convenient way of life, like having proper toilets in the house. “There are 24 self-help groups in my village and two of them received funds from the government to construct toilets in 30 homes,” she says. “But they did such a shoddy job that the toilets were unusable. Our FPC has fixed these problems.”

‘We don’t have to make difficult choices anymore’

Mefore she became a lakhpati kisan, Turlen Dhan’s family lived a hand-to-mouth existence. “We had so little money that we often had to decide between paying the children’s school fees or buying medicines for the household,” says the 30-year-old farmer from Ruitola village in Jharkhand’s Khunti district. “I used to be very sickly and we didn’t have enough money for my treatment.”

Engaged in the traditional practice of paddy farming, as most villagers in Khunti are, there was rarely any surplus for the Dhans to sell. “I had to ask my in-laws for money even though they never had much either,” says Ms Dhan. “Or we took loans and got into the never-ending cycle of having to pay it back. I even borrowed from the local self-help group for my medical expenses.”

In 2017, Ms Dhan and her husband decided to cultivate tomatoes. They took the step with trepidation, given that one bad harvest would wipe them out. But the first yield itself was so bountiful that it provided funds for them to increase the size of their tomato patch. “Today we have to hire labourers during the picking season,” says Ms Dhan.

The family has, additionally, invested in pig, goat and chicken rearing. “A further source of income for us is lac cultivation, which alone helped us earn

200,000 last year,” says Ms Dhan. “I have enough money to now send my daughter to a good school in Ranchi.” The family has also built a ‘proper’ house, with toilets and other amenities.

Ms Dhan is now a picture of good health. Living in one of the farthest villages of the district, she travels great distances to come for the periodic FPC meetings. There’s no question of her feeling run down. “I’m grateful that we no longer have to make difficult choices,” she says. “To me, that’s the definition of a better life.”