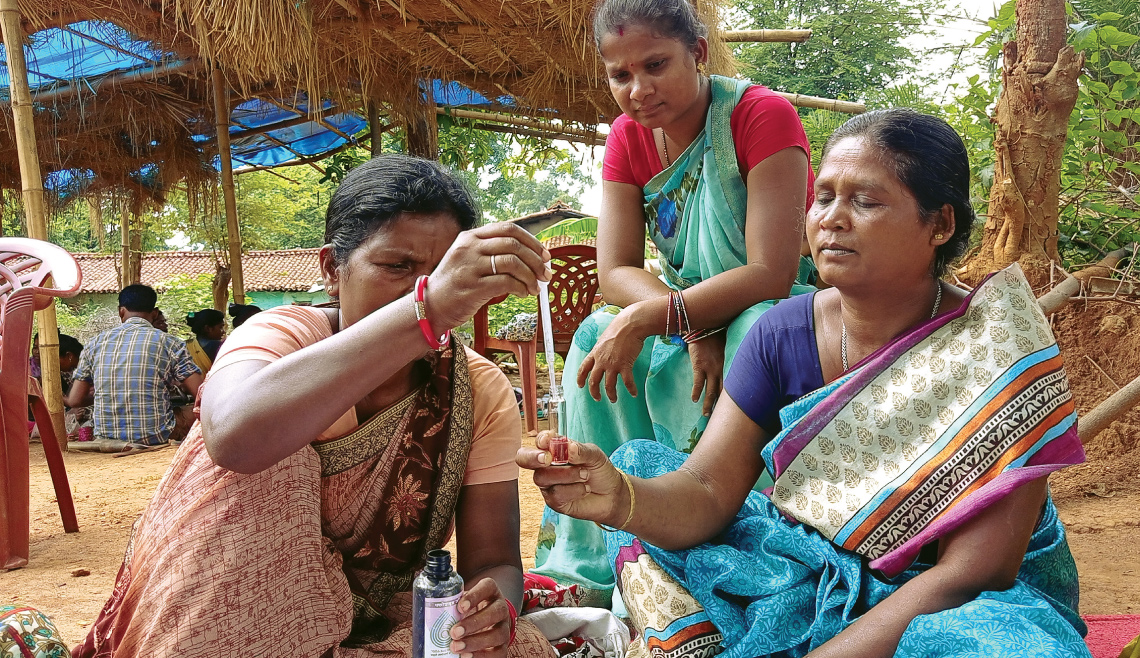 It’s all about water

A water and sanitation programme in six Jharkhand districts is tackling issues of access and quality, while also bolstering the government’s ambitious Jal Jeevan Mission

Jagannath Purti feels for the women of his village. “Till recently a river that’s almost a kilometre away was our nearest and only source of water,” says the secretary of the Gajgaon village council in Jharkhand’s Khunti district. “Our wives and daughters had to travel that distance to bring back water for cooking, washing, everything.”

Gajgaon’s women were forced to juggle chores, and sometimes leave their clay ovens burning or infant children unattended, just to go and fetch water. Since they could carry only 10-15litres at a time, they had to make several trips. “And this didn’t even take into account the water required for bathing, for the toilet or for cattle,” adds Mr Purti.

During the dry season, when the river’s water level went down, Gajgaon had to depend on its wells and small tanks (called chuas) constructed on farm lands. The water here was not clean, leading to diarrhoea and other water-borne diseases becoming rampant.

Gajgaon is in better shape today. Thanks to the central government’s Jal Jeevan Mission (JJM) — which aims to provide tap-water connections to every rural household in India by 2024 — some sections of Gajgaon are now served by borewells with connections pulled to the nearest homes.

JJM is implemented on the ground by village water and sanitation committees (VWSCs) formed specifically for this purpose. They assess the village’s requirements, liaise with the government and resolve problems. Spreading the word about JJM in the field are jal sahiyas (women water warriors), who are selected from among the younger members of the community.

The Tata Trusts, through its partner organisation Collectives for Integrated Livelihood Initiatives (CInI), is lending a hand to JJM, while also implementing a water, sanitation and hygiene programme that is slated to reach in excess of 7,000 village households across six districts of Jharkhand.

CInI is a partner for the state and district-level water and sanitation missions under JJM, supporting the government’s work in 220 villages. “Our effort is to strengthen VWSCs, identify local sources of water, calculate each household’s need and, most important, mobilise and motivate people to opt for these benefits,” says Sandeep Dungdung, field coordinator with CInI.

The larger objective is to eventually create community-managed systems that will provide adequate and safe drinking water, and take care of sanitation needs as well. Connecting with village communities is crucial for this to be turned into reality.

“CInI’s trainers came and spoke to us about a solution to our water problems,” says Sandhya Devi, a jal sahiya from Hassa village in Khunti. “They taught us how to map our village, showing where each house, field and existing water source is located. We also prepared a detailed village action plan report to submit to the government.”

Says Sushma Karait, another jal sahiya: “Each tola [village zone] is supposed to have its own borewell. So far our petitions to the government have yielded two borewells. We have nine tolas, so we need another seven.” CInI, working closely with VWSCs, helps keep the pressure on the local administration to deliver on its promises.

For instance, in a few months Gajgaon will get its first overhead tank that, depending on capacity, could provide water to at least 50 households in its vicinity. There is more. VWSC members are given testing kits to check the quality of the water and see if it is fit to drink. This requires a fair amount of training, which is imparted by government officials, but there are gaps and CInI fills these.

The training organised by the government takes place at gatherings with a large number of people attending. It’s usually too crowded for personalised attention. CInI provides additional training for smaller groups, especially those who are new and may need some practice.

When the overhead water tanks are installed, many more households will receive water through a tap. But it won’t be cheap. “The connection will incur a one-time cost of

50 every month for electricity, which is expensive for us,” says Ms Devi. On CInI’s urging, VWSCs are now considering solar-powered borewells and water tanks. 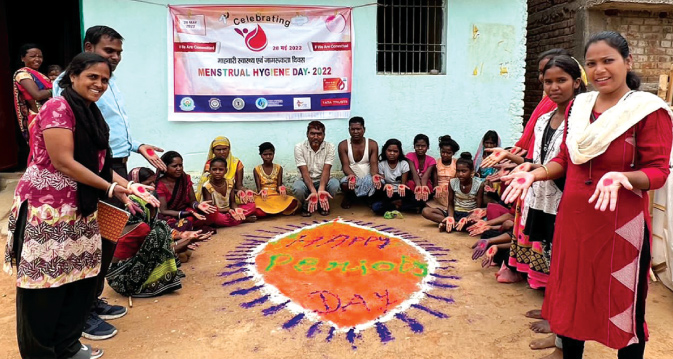 Hemanti Topno, a trainer with the menstrual health management (MHM) programme run by Collectives for Integrated Livelihood Initiatives (CInI), an associate organisation of the Tata Trusts, in Jharkhand’s Khunti district, says the hardest thing about her job isn’t getting women to talk about menstruation. “It’s getting them to look beyond myths and taboos.”

“The euphemisms used to describe periods show the stigma attached to it,” says Ms Topno. “Some call it chandu rog, or an illness that mimics the cycles of the moon. Others call it gadasa, or going down to the river.” Therein lies the problem.

For generations women in the tribal belt of Jharkhand have believed that throwing their used sanitary pads in the river will perpetuate their menstrual flow and improve their chances of childbirth. “This is unhygienic. We need to break free from such behaviour and teach women about the safe disposal of pads,” says Ms Topno.

Destigmatising periods means ensuring women speak up when they face menstrual or reproductive health issues. Having worked for four years as a trainer, Ms Topno travels from village to village in the Murhu block of Khunti trying to get women to open up.

“I first approach the local self-help group (SHG) serving a cluster of villages and request them to invite women to a designated place,” says Ms Topno. Then she sets about talking to the gathering, armed with a host of learning tools.

The most useful of these is an apron with overlapping flaps that explains, through diagrams on the flaps, how menstruation takes place. CInI has designed a four-module programme, each to run for one-and-a-half hours once a week, that covers the gamut from how periods happen to what menopause is. There are separate modules for adolescent and teenaged girls, teenaged boys and married couples.

The MHM programme, which was launched in 2019, has seen 21,703 people across six districts in Jharkhand receiving training. It has been welcomed mainly because menstruation is deemed such a taboo topic that even mothers don’t speak to their daughters about it.

According to Eleseba Nag of Bhursu village, thanks to the MHM programme, women now understand that menstruation is nothing to be ashamed of. The disposal problem has been taken care of, with most village homes now having clay pot incinerators to burn used pads. Till now, 1,265 such incinerators have been installed in CInI’s project areas.

When the taps are installed CInI’s trainers will again play an important role in advising villagers on where in their homes the connections should be placed, how frequently they should test the water, and how much runoff they should allow to recharge the water table. Also in the mix are soak pits and kitchen gardens.

“Our lives and our health will become better with easier access to water,” says Lalita Surin, a jal sahiya from Mahil village in Khunti. “We won’t have to fetch water from great distances, so we’ll be able to get our children ready for school on time. We will get clean drinking water and, perhaps, finally be able to use those toilets that were constructed under the [central government’s] Swachh Bharat Mission but are now being used as storerooms.”

Gajgaon’s residents, like countless people across the country, received funds under the Swachh Bharat Mission to construct permanent toilets in their homes, and they did. The hope that running water would follow was dashed, though. In the project areas that CInI operates in, the idea of the lakhpati kisan — the farmer with an irreversible income of at least

120,000 per annum — is tied to the idea of an improved quality of life. Which is where permanent toilets come in.

Across Jharkhand, CInI’s efforts have resulted in 8,432 toilets being constructed with the active participation of the community, drawing on more than

110 million from government funds. Furthermore, 12,060 existing toilets that were lying unutilised have been brought into use and 612 lakhpati kisans have contributed their own money to construct toilets in their homes.

The desire is for the community to take these initiatives forward and that’s already happening. At a recent meeting about the proposed overhead tanks, while most of the gathering was debating the merits and specifications of the home connections they will soon get, 77-year-old Basanti Purti had a different view.

The village elder and VWSC member, who has for decades seen the hardships faced by her community owing to the lack of water, says: “We need to visit other villages where tanks have been installed to see if it will suit us. These amenities are being planned for our village, so it’s time we took ownership of the process.” 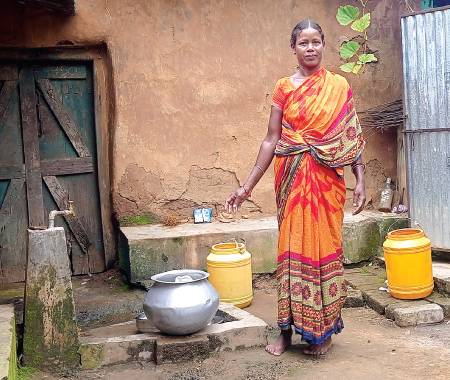 Sunit Tiru of Pokla village in Murhu now has a tap connection at her doorstep
In this section: